Have Yourself A Very Pootie Christmas

People have traditions about their Christmas trees. They pick out the same kind and decorate it with the same stuff from the same attic every year. We never know what we’re going to do. The closest we have to a tradition is the beginning part when I hold the tree upright in its stand while Dave is all crumpled up underneath it swearing like a motherless sailor. That eloquence reached its apex the year of the Stealth Scoliosis Tree that did not look straight from any angle after it left the lot. Probably that marked the beginning of the great tree reduction decade, during the course of which we got ever smaller trees and even threatened to skip it altogether. 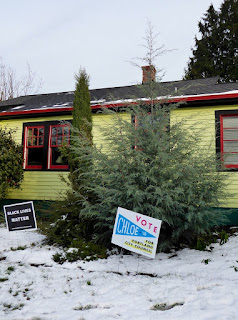 Which is where Pootie comes in.

Pootie, of course, is the small lint-for-brains dog who runs everything worth running around here. One of Pootie’s primary functions is to catalog and archive Dave’s baser desires as a hedge against his eventual civilization. That is why the television is often tuned to a basketball game even when no one but Pootie is watching; that is why the heat is often on in rooms no one’s in. That is why there is a mountain of chocolate in the house at Easter, and why there is still a stocking for Pootie every Christmas even though the rest of us have quit exchanging presents. And that is why we still always have some sort of Christmas tree. 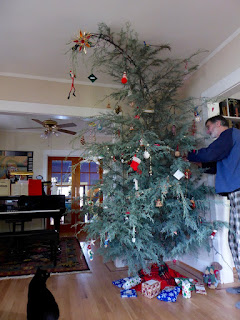 The year we decided to quit altogether, Dave relayed the information that Pootie would like a small one for himself, so of course he got one, and festooned it with ornaments of his own choosing, including a ceramic jockstrap and a garish star from the Dollar Store. That tree was about a foot tall, and it was something. The next year we again did not get a tree, but Pootie’s was a little larger. This went on for years until Pootie’s tree was the same size ours used to be. 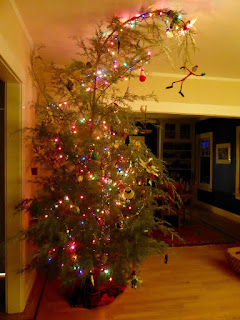 I suspected I’d been hornswoggled, but Pootie had such a look of innocence in his buttons that I went along with the program for a while. And then came the year I announced I just wasn’t up for getting a tree. And that year, on Christmas morning, Pootie presented me with a tiny potted Arizona Cypress because he knew I wanted one, and we hung as much stuff as we could on it. Every time you think Pootie has been indulged quite enough, he goes and does something sweet like that. That was the same Christmas we drank up our stash of Hoptimum IPA at ten in the morning. It was a good year.

The cypress went outside, still in its gallon pot, while I pondered where it might reasonably be planted, and finally I decided to plant it next door at the rental house. It was now three years old and three feet high. We turned our backs for a moment–had to go get ice cream or something–and when we looked again, it was twelve feet wide and sixteen feet tall and utterly too ambitious for its location, and we hatched a plan to dig it up and transplant it to a friend’s house, but somehow it never happened, and it kept growing, audibly, until it occurred to me: but it would make a terrific Christmas tree. 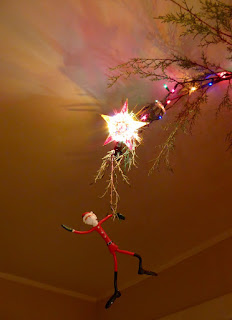 Which felt wrong, somehow, like baconing your own pet pig, but after all what else would we do? We’d buy a different tree someone else had cut down. This way we’d at least own our transgression. We checked with Anna, whose kitchen-window view was fast being obliterated by a bustle of cypress branches, because we knew her to be a sensitive soul, and she gave us permission to do the deed. And so we butchered it humanely (which is to say, when Anna was not watching) and now Pootie’s little blue tree is going out in a blaze of glory in our living room. With its nine-foot ceiling.

We didn’t top it. I don’t think we ever can.