He Got A New Attitude

Dave said we needed to repaint the house two years ago, and planned to do it last summer, so this summer he really meant it. He’d been worrying about it ever since the paint dried fourteen years ago; he got agitated if I planted something too close to the house that would just need to be trimmed back later. He is a pre-emptive fretter anyway, believing that early worrying gets you in shape for massive anxiety down the road, and so he was well-prepared for a personal breakdown by the time he got the ball rolling. He set up an impressive array of scaffolding to contend with our tower, all by himself, because he is a fit and strong sixty-year-old man with a hell of a work ethic. Unfortunately a strong sixty-year-old is still weaker than a strong 46-year-old, and that fact coupled with the weight of all the responsibility that he takes on led him to approach the job like a man walking to the gallows. He was deeply unhappy. And I know what that leads to. That leads to me being deeply unhappy.

Then a friend listened to Dave’s concerns and said: “you know, that’s what money is for.” A light went on for Dave. For the first time it occurred to him that he needn’t be responsible for everything that got done in the house. He hired the job out. Within a week the painting fairies showed up in profusion. They made themselves at home, even peeing behind the shed just like Dave used to before the raccoon incident. They crawled all over the house with scrapers and sprayers and a boom box set on Country 98.7, and within days things were shining up and I realized I could probably write a hit country-western song every day before breakfast, and twice on Sundays. 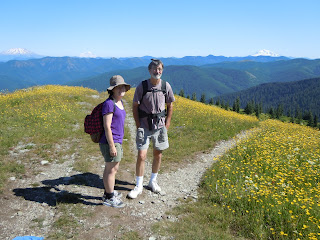 I am immensely proud of Dave. This took a complete change of perspective and humans are not wired for that. He had to change from a man who takes care of everything, particularly me, to one who is willing to relinquish control. He also had to veer away from the idea that this was evidence of his own deterioration, and he did. “I’m painting my house!” he exclaimed, while pulling up crab rings on Nehalem Bay. “I’m painting my house!” he exulted, hiking among wildflowers on Silver Star Mountain. He was painting his house, and he was providing local jobs, miraculously without receiving a tax cut first.

The emotional transformation did not go without a hitch. While home, he peered at the progress overmuch, noticing a bit of overspray here, a lack of industry there. I tried to demonstrate serenity by my reactions to the tromping of my garden. The fothergilla I’d been nursing for years was stomped at its roots. “It wasn’t doing too well there anyway,” I said. The whole south side was draped in plastic on a hot day, instantly frying all the foliage. “I meant to re-do that part of the garden anyway,” I said.

This is something I’m pretty good at. When things go sideways, I adjust my attitude. It comes naturally. I have a strong aversion to despair, and I will totally make shit up if I have to. If my sandwich falls jelly-side down, I figure I’m gaining some fiber. If I have something amputated, I’ll say I dropped a few pounds. I can even look at the state of the world and note that at least it’s good for the handbasket industry.

Then I came home to find the offending killer plastic stretched over my boxwood topiary salamander and blew a gasket. This was an outrage. This was a cocker spaniel puppy locked in a car on a hot day. This would not stand. 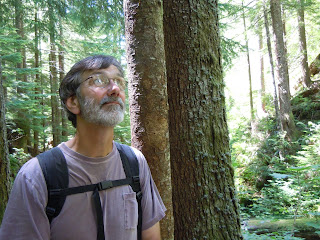 I guess it’s not the worst thing, after all, that Dave still cares how well something gets done, even if he doesn’t do it himself. I guess I need to look at the big picture, too. Dave no longer feels compelled to take responsibility for everything that happens in the house. And that’s a good thing. As long as this philosophy doesn’t extend to cooking, that’s a good thing.