Heat By Soup And Sweater 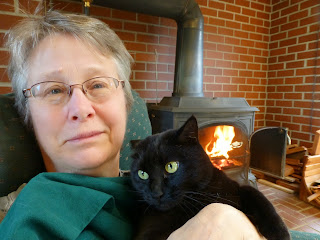 We started with a reasonable-sized house (American-moderate, Third-World-ridiculous), and then we let our desires get the upper hand and it metastasized into a 2700-square-foot house even though it was still just the two of us, and in all that time I have never really been willing to heat the sucker. When we bought it in 1978, an octopus furnace squatted in the basement, eating oil. It was not forced-air. My grandma had a house with a big vent in the floor on the main level and all the heat emanated out of that without blessing the second floor in any way. Somewhere in the nether regions was a furnace that hoovered coal, which was as plentiful as bunnies in North Dakota. Our house in Portland was similar, in that if you turned the thermostat up, a big rumbling could be heard from the basement, and a tepid breath of warmth would seep out of the various vents and take the edge off, after an hour or so.

Second floor? Forget it. Whatever vapors deigned to coax the first floor into the low sixties were sucked straight out the walls and windows before encountering the second floor. That’s where our bedroom was. Our breath froze on the windows to the point of being chippable. I bought flannel sheets. I had insulation blown in. I think it was more a suggestion of insulation. We don’t really know where that insulation ended up. You’re supposed to trust the blower guy. 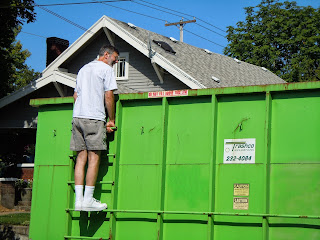 Early on I bought a Vermont Castings wood stove and Dave installed it in the kitchen after he put in brick walls and a hearth. I spent most of the winter four feet away from the stove. Dave put in ducting and a fan to pull some of the wood heat into our bedroom on the second floor. The ice disappeared from inside the windows but it was still hard to get out of bed in the morning.

We bought a cord of wood that first year but then Dave kept coming upon discarded pallet material and whatnot and before long he had developed a habit of scrounging waste wood from construction sites, a habit that continues to this day. “What does your husband do now that he’s retired?” people ask, and the first thing I think of is his butt in the air bent over a dumpster scouting for dimensional lumber. All our wood is free, if you put no value on his labor and willingness to dumpster-dive and saw shit up for our stove.

We each had our bailiwicks. I’d pay for utilities, for instance, and he’d pay for food. It just sort of settled out that way, and after about five or ten years of shivering in the dark, Dave announced that  he was going to (dammit) pay for fuel, and he (by cracky) planned to pay for some right then and there. He’d buy us a tankful of oil, and stride right up to the thermostat and flip the lever Like A Man. The problem was–and he knew it–something else was responsible for my heat tightwaddery. There have always been things I’m totally cheap about and other things I can’t throw enough money at. My budget for good beer would buy a lifetime of BTUs. I’ll go out and spend enough money on one dinner + tip to pay for a hundred mosquito nets for African kids. I buy Art. But I’ll reuse the same Kleenex until it’s saturated and if it has enough integrity to hold up when it dries I’ll pull it out flat and start over. And I can hardly bear to heat my house. 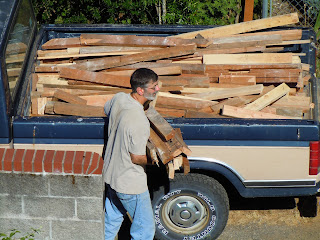 When I was a kid our house was always cold. I remember crawling behind my mom’s Electrolux vacuum cleaner because the exhaust coming out of the back end was warm. Sensing the oil heat flying out of the house makes me squirm. Maybe early on it was about the money, but now it just seems wasteful in a way that drinking good beer just doesn’t. We have natural gas heat now, but that isn’t much better. I hate to pull all this fossil fuel out of the ground and squander it just because it’s hard to move with ten sweaters on. I’m not out of sweaters yet.

It’s the curse of the liberal. I’m totally cool with having a wonderful meal and supporting my local farmer and brewer and restaurateur and wait staff. One of my favorite local joints was in an old drafty concrete electrical substation building that was impossible to heat. The waiters tucked Pendleton blankets around our laps and then brought us Pad Thai. I felt right at home.