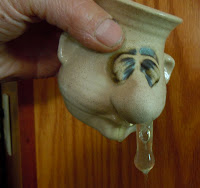 It’s a sign of what I’m going to call maturity that I no longer like to accumulate things. I was never one to go into debt for crap, but I’ll admit to buying crap whenever I thought my life could use a little sparkle. If I saw something I wanted, even for a nanosecond, I was usually able to work up a reason I needed it. That is why I own an egg separator in which the whites drip out of ceramic nostrils. It’s taking up space in the cupboard and now I find myself wanting the space more than the item. I’m giving stuff away like a suicidal person. Used to be, the fact that I don’t have a full set of matching plates would be enough to justify a new set. Now, as long as everyone at the table has something to dump the potatoes on, I’m good.

I do have two things I would love to replace. One is my coffeemaker and the other is my printer. The printer is squawky. Semicolons will scare the ink right out of it. Lately it’s been pooping out test pages every time I turn it on. I have to fluff up every piece of paper before it will suck it in, and the last time I opened up the back to officiate over a paper jam, I busted it. This means when I print a document with numerous pages, I have to fluff each individual page, jump to the back to hold the piece of plastic on until it feeds, and then pop back to the front to fluff again. I really hate the idea of ditching yet another piece of plastic in a world with way too much of the stuff, especially since I am still able to print documents (plus the bonus test page). But on a wild hair, I did. I hate shopping, so I just picked out something on special online. It was Chinese-worker-wages cheap and shipping was free. Two days later a box thudded onto the front porch. I re-straightened our hanging pictures and had a look. My! 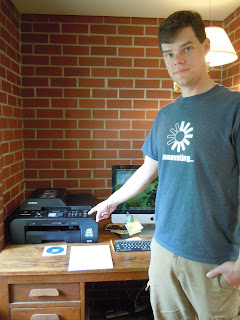 We lugged the huge box into the kitchen and peeled it open, assuming it would be mostly packaging, but it wasn’t. It squatted in the middle of the room and said Boo-yah. I’m getting used to having appliances that are smarter than me, but I don’t want one that could beat me up. I folded the cardboard back over it and slid it toward the wall. Not till the next day did I feel up to looking at the instructions. Number One was to check to see if it was there, and after that things fell apart. We needed whole different cords depending on whether we planned to scrapulate with it or just use it for making thermocules. Different directions applied if we wanted to operate it remotely from Jupiter or spring it into action by barking at it. I gently put the manual away and left the thing in its original plastic wrapper in case I needed to smother it in the middle of the night. Because I had an ace up my sleeve. We had young friends coming to visit in another two days. 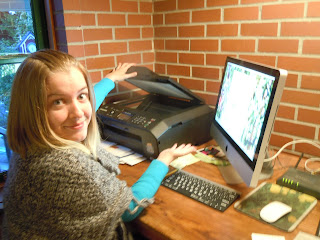 And then they came, Big Dave and Vivi! Their skin was taut, not flapping, their brains were firm, not spongy, and both were full of the easy good nature that we have come to associate with young people, because we are not their parents. Big Dave had not been in the house five minutes before he prodded the box with a toe and said “new printer?” as though he did not know the meaning of fear, and a day later, he had the thing corralled on our desk with all the cords spanked together, and Vivi took over to make the introductions with our computer. “There you go,” she said, “we have unfriended Hewlett Packard, and now we’re in a relationship with Brother,” and, if you don’t think about it too hard, that is a wonderful thing. 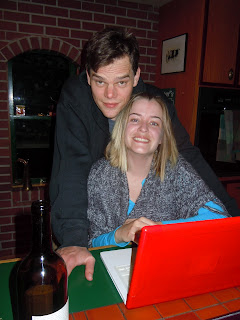 Dave and Vivi need a coffeemaker, and I’m going to give them mine. That will give me an excellent reason to buy a new one. The old one works just fine, but it came in Almond, to match the refrigerator we once had. That means it is now the color of old men’s teeth. It’s pretty obvious by now, twenty years in, that I’m not going to keep the thing clean, so I want a new one. Black.