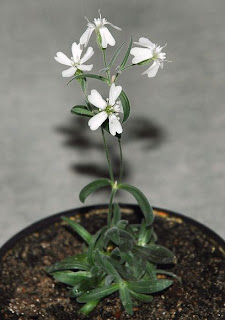 Russian scientists just grew an antique campion plant from a 32,000-year-old seed, and I can’t even sprout an aster from last year’s seed packet. They claim the campion seed had originally been buried in a burrow by a squirrel, where it froze solid, and was only recently recovered and prodded into life. It’s hard to count that many rings in a non-woody plant, but if the age estimates prove out, it will be by far the oldest plant to have been generated. The scientists in charge are pretty confident after interviewing the squirrel in question, who was found at a local library looking for the card catalog and muttering to himself. They’re excited about growing an old campion next to a new campion and studying the evolution of a plant in real time. But they’d better keep a close eye on it, or somebody might take it, like Homeless Dave.

That’s what happened to our lemon. Homeless Dave was but one of a surplus of Daves we had in the neighborhood; we have enough that everyone can have one of their own. We’ve got Big Dave, Little Dave, Store Dave, Old Dave, New Dave, and Republican Dave, who moved away in search of lower taxes. My Dave (“Old Dave”) had befriended Homeless Dave, if by “befriended” you mean “didn’t run away screaming.” Homeless Dave was a toothless Vietnam vet with a mohawk and a drug problem and a voice that could make bridges go up and down. He favored feathers, large knives, shiny objects, really large knives, and psychotic breaks. He would show up at inopportune times (although, to be truthful, no time was particularly good) and bellow conversationally until you gave him some money or food. Dave, who has a saintly nature he tries to obscure with curmudgeonliness and targeted flatulence, paid him attention and cooked him gummable meals. One cold night, while we slept, he came by and built a raging bonfire in the Weber and dragged it under the eaves of our house where he was trying to escape the wind. Dave brought him inside long enough to get a hot meal in him and sent him away while I crossed Social Work off my to-do list. Homeless Dave was a pain in the ass. I wished him safe and warm and happy and in Central America. 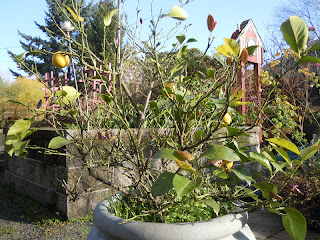 About the lemon. We had a lemon tree we’d bought that claimed to be hardy to 20 degrees. And it was. It was hardy, but that didn’t mean it was in a good mood. We kept it outside in a pot and knitted sweaters for it and spooned juice into it and sang to it and bought it a Savings Bond and finally, after about ten years, it began putting out experimental fragrant flowers, a few of which finally resolved into tiny fruits around five minutes to winter. We watched them carefully as they struggled to grow, and after about eight months they began to veer yellow, and we lost all but one, but that one got fatter and yellower until Dave pronounced it just about ready to eat. One summer day he came around the back of the house to find Homeless Dave mopping juice off his grin. “GREAT LEMON, NAMESAKE!” he said. “BEST I EVER HAD!” And Dave fingered his pruning shears while contemplating his chances of successful homicide against a well-armed crazy ex-Marine. Ultimately he let him go with stern words and an omelet.

Homeless Dave showed up with useless gifts, scavenged or stolen, but he meant well. One time he pounded on the door before dawn with an attitude and a knife that wouldn’t have looked wrong on Orion, demanding attention from my Dave as he was trying to leave for work, and Dave told him he’d worn out his welcome. We don’t know where he is now, but if he showed up bearing a bouquet of 32,000-year-old campion flowers, it wouldn’t surprise me in the least. And that would be a blow to science. I’d also watch out for Monsanto. If they even think they can engineer a shortcut to pre-frozen vegetables, they’re going to try.