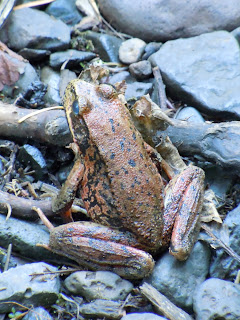 Dave and I have agreed that we are probably in one of the last generations, we humans having evolved ourselves right out of a job, and we’re not sure that’s such a bad thing, although we’re sorry for the frogs. We seem likely to soon be gone with both a bang and a whimper, and good riddance. On the other hand, as Dave points out, our generation is in the privileged position of being able to enjoy all of our self-destructive toys on our way out. 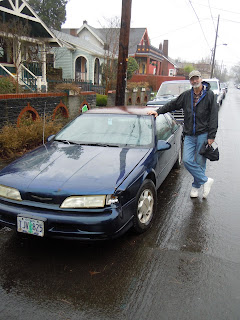 He’s not ostentatious about it. His car is what he describes as “suede-top” ’93 Thunderbird, resolutely parked where it can rust in peace, while he walks all over town; fourteen miles to buy a pencil is nothing to him. The walking habit began when he quit smoking. He left a single pack on the microwave and walked away from it until it felt safe to turn around, at which point he might be twelve miles away. His embrace of modern technology is minimal and his needs and wants modest. No, what he really enjoys doing, as our planet bakes and gags and prepares to grease our exit, is to stand in front of an open refrigerator door, after first turning on all the lights in the house. He stands, he basks, he looks around, and he drums incessantly on the open door, the habit of percussion having long since replaced the tobacco. He will stand there until he finds the pepperoncinis or finishes the drum solo to “Sing, Sing, Sing,” whichever takes longest. To add to his pleasure, we have two refrigerators. And to further add to his pleasure, this routine drives me batcrap crazy. If I seem to be engrossed in something and paying insufficient attention to him, he will drum his way into the kitchen, snap on the overhead lights, open the big fridge, leave it open and go to the small fridge and open that, drum for a while, fan himself with the door, then leave the room and flick lights on all the way up to the second floor, where he hopes to locate the mustard in the underwear drawer. (Sadly, as time goes on, this has become increasingly likely.)

I resolve not to give him the reward of jumping up and screaming, but in a minute, after having visualized a herd of salmon leaping out of the refrigerators and flopping on the floor, X’s over their eyes, he gets his reward. The energy waste is a small price to have to pay, unless you’re a salmon, for that giddy feeling he gets when I go batcrap crazy. 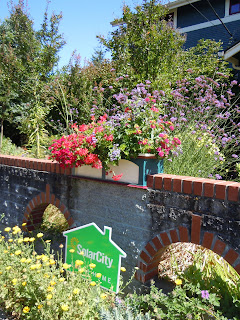 We run hydropower here in NW Oregon, and there’s always been plenty of it. Dave’s habits have been ingrained since childhood, when there were just as many dams and far fewer people. I open the fridge door long enough to slip a credit card through, if you’re fast. I have tripped over furniture because of my disinclination to turn on lights. But I have my own appetites. I have discovered that I can solve any problem I might be having with my writing while I’m in the shower. This is so reliable that I routinely look over a piece I’m working on before stepping in the shower. The longer the shower is, and the hotter it is, the better. If I look pruney to you, assume I’ve had a major literary breakthrough. 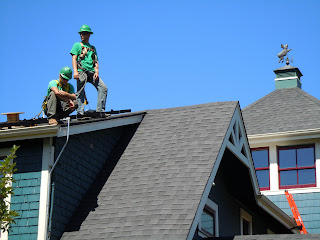 But the whole problem of our wastefulness has now been solved, because we just had photovoltaic solar panels installed on our roof. And do you know what this means? No, it doesn’t mean we are off the grid; we’re only expected to recoup 17% of our current (ha!) usage. No, it doesn’t mean our hot water is free; our electricity goes back to the power company. Here’s what it means: 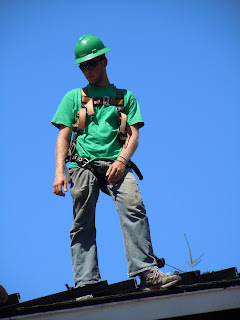 We’re cool. We’re immensely cool. We are way cooler than you, probably. We’ve been way cooler than you since we got the little “Solar City Home” sign poked into our front yard, and now that we have actual panels hooked up on our roof, our coolness is off the charts. We wouldn’t have them if you, the taxpayers, weren’t giving us a lot of money back–thank you, taxpayers, who are less cool than we–but we have them, and our smugness knows no bounds.

The crew that installed them showed up in matching green shirts and crotch-defining safety harnesses, and I started feeling warmer right away. The panels aren’t very noticeable except from up the street, so we’ve left the “Solar City Home” sign up, at least for a while. Oooh! You have solar panels! Do you love them? Oh, those? Yes, we’re very pleased. Here is a beatific smile for you, and thank you, little people. We are very, very cool.

We should have no trouble jacking up our electrical usage to make up for the 17%. Dave has moved his chair in front of the open fridge door. And I’m working on a novel. I plan to drain the reservoir.