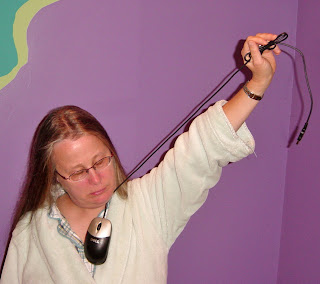 My computer is not demure. It rumbles and farts and belches and sometimes it revs up like an airplane. You get used to it. Recently, though, it began to snicker. “I know something you don’t know,” it rattled, which seemed likely enough. I didn’t press the issue.

The computer was not original to me, but was only a few months old and lightly used when it passed to me after a death in the family. At first I thought it might be haunted, but eventually I realized it was probably just the Windows Vista. Periodically it would get the vapors. It would be mincing right along and then suddenly it would collapse on the divan and fan itself. “My, my,” it would sigh, urping just a little, then “Lordy, lordy,” one leg dangling languid off the side, a pale hand fluttering at its bosom. You could tell it to fetch you a tray of juleps all you wanted to, but there was no hurrying it off the couch. And then several times a day it would freeze solid just for the pure hell of it. I responded to this by clicking on everything in sight until the cursor itself seized up, and then there was nothing to do but sit back and give it the stink-eye until it came to again, presenting me with a visibly thick stack of windows representing everything I’d clicked on. I’d have to hack through these until I uncovered my original thought.
For many years I was drawn to and repelled by my computers. “Do this, and go find that,” I’d tell them, and they’d roll their eyes at me and say, “God, you’re stupid.” Which I found irritating and irrefutable. My neighbor Beth was one of the first to help me get over this. I had her over to figure out something I was doing wrong, and she sat down, relaxed, wielding my mouse with self-assurance. It promptly served up the same error message I had gotten, which she dispatched with a dismissive “poo” and tried the same thing over again. Again with the error message, once more with the “poo,” and repeat, four, maybe five times, until finally the machine rolled over and did as it was told. Ah! So it’s like riding a horse, and you just have to let it know who’s in charge? I can try that. Of course, I can’t ride a horse.
Al Einstein said that was the definition of insanity–doing the same thing over and over again and expecting a different result. But he didn’t have a PC.
After Beth showed me how to flick an error message away, I was more relaxed, but I still found the thing annoying. I’d send it off to find a simple file, and it would rattle and gurgle and cogitate away, but it never found anything. Instead of being irritated that the machine was smarter than me, I realized it was worse than that. It was just as dumb as me. 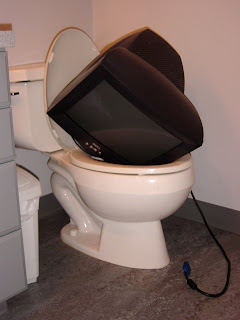 So the other day when it began snickering and acting up, I ignored it. The screen had come up dark as twilight and swallowed my cursor. I dealt with this in the usual way, which could be replicated with one forearm on the keyboard, and then I shut it down. You’ve got all night to think about what you’ve done, I said. The next day a screen came up with a scolding tone to it, and I ignored that too. Later the twilight fell again. I shut it down. I yanked it back to life. “Poo,” I told it.
Soon comes a night when I’m very busy at a mindless but addictive game that ruins my posture, strains my neck and is so bad for my eyes that little mah-jongg images have been seared into my retinas. I’m leaning into the screen and POOM! The whole thing blows up and goes black, sudden as the Voice of God, who sounded a lot like my optometrist. My game was gone. So were my photos and address book and a number of other things I haven’t thought of yet. It was very, very dead, and there was nothing left to do but look up “doornail” in the dictionary.
To be continued.
By Murr Brewster|2021-11-09T21:32:04-08:00November 14, 2009|Uncategorized|10 Comments