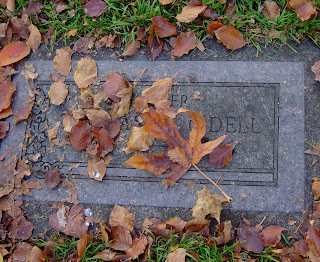 You will recall from a previous post that my Dell computer with Windows Vista has been hit by a comet and all my data are either cowering inside or have become glassified. Only a professional will be able to tell. Meanwhile, I have some decisions to make.

I posed the Mac vs. PC dilemma on my Facebook page and was soon mobbed by Mac evangelists. They were so effusive and seductive that I felt I could fling myself onto them and crowd-surf all the way to the Apple store. Then a few of my most trusted friends dared to challenge the dogma. “It’s your antivirus software that causes most of the problems,” one said. “I haven’t used it on my PC for years.” This may be true, but this is from a man who can see trouble coming and whack it off at the knees. Some of the sites we’ve been known to visit could give us a virus, never mind the computer. Glory hole? Sounds uplifting. Camel toes? Cute! Must see!
This friend loves to tinker about with this and that on a computer, and I’m happy for him. But everything I try to do in the way of maintenance or trouble-shooting feels like a battery of IQ tests, each one presenting new evidence of personal dunderheadedness. I don’t need this aggravation. I held onto my SAT scores for decades to defend myself against those who would cast nasturtiums on my intelligence, until I finally realized that anyone looking at those scores today would invariably blurt out, “Good lord, woman, what happened to you?” And I would reply, as I often must: I have no idea.
Same man enjoys manually updating his PC, but I emphatically do not. My PC is a total bitch about updates. I slap the reminders off the screen (“Poo,” I say) until they begin forming a posse on my taskbar, and then, resigned, I go to the site for my update. That’s when the trouble begins. There is no “update.” There is an entire menu of updates, and service packs, and patches, and it wants me to choose which ones to download. And that is what I’ll do, just as soon as I get off the phone with NASA about their Hubble parameters.
It’s worse than Jiffy Lube. You pull in there, and there’s just a whirlwind of activity, with scrubbed mechanics barking efficiently at each other from all around and underneath your car. Ultimately someone comes forth with a list of things he thinks you should do. “Your drabnitz lining is getting a little worn [here he’s holding out a damp carcass of some kind for my examination], and we can replace that for $19.95. We’ve tightened up your splagnuts but you could use a new furtle filter, $24.95. It’s about time to top up your humours and rotate your radio buttons, and we’re showing you’re overdue for your ten-point farkling system inspection.” This goes on for a while.
I always bend over the list, furrow my brow and tilt my head in an imitation of intelligence, and then pick out two or three of the suggestions completely at random. Just on principle, I’m not going for the full boat. If my furtle filter strands me on a dark country road, so be it. I do not have a clue.
Same scenario at the Microsoft site. Confronted with a plague of packs, patches and updates, I hurl mental darts at the screen and elect to download this or that. But we’re not done. It wants to know where I want my download to go. I know where I’d like it to go–wherethesundontshine.exe–but that’s never an option. So I click on their default setting, and that’s the last I’ll see of that download. If I ever stumble upon its location, it will be sitting back with its feet up smoking cigars with Dick Cheney.
I admire people like my friends who navigate serenely about the innards of their computers. And some day, assuming there is such a thing as reincarnation, I will be that person. For now, though, I am cleaning off my desk for the arrival of a new iMac. It’s sleek, it’s slim, it’s fully automatic, it doesn’t need the protective undercoating, and it comes with everything but heated seats. And Windows.
Update.
It’s here. It’s got a screen the size of a pillowcase, and the Mac boys dug into my old PC with a forceps and vise grips and pried out all my files. It’s fast, it’s quiet, it’s limber, it took a picture of me and my cat Tater just for fun, and I’m thinking about letting it do my laundry. Also, my seat is heating up. 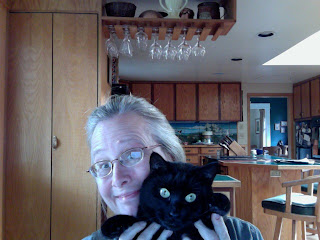