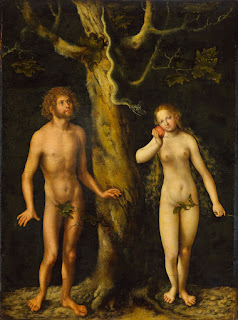 Adam and Eve had belly buttons. I know because they’re in all the pictures. The pictures were divinely inspired, so they must have been there; and Adam was made out of mud, so I’m thinking God stuck a thumbprint in him while he was baking, so his eventual offspring wouldn’t feel weirded out about their navels. That’s the only thing I can come up with and it does speak well of God, who nevertheless went on to do a heck of a lot of smiting, but things were fresh and new then, and everyone felt optimistic.

But if you keep on with this story you’ll quickly arrive at more questions than answers. For instance: who did First Sons Cain and Abel get children by? All the possibilities are awkward.

As it happens, this question has troubled people through the ages. It doesn’t trouble people at all that nobody ever mentions any daughters of Adam and Eve, because after all they’re just females, but speculating about such daughters and their possible coital relationships with their brothers has put religious folk in a flat tizzy for thousands of years. (No more than six thousand, though.) There has to be another explanation. So one theory goes that Cain got a wife from a race of humans that pre-dated Adam and Eve. Which is problematic if you’ve already swallowed the notion that Adam and Eve were the first and nobody ever said anything about Neanderthals.

So not many people go with that. We’re left with Cain and Abel marrying their own sisters, and, as has been pointed out, there’s nothing in Genesis that rules out that Adam and Eve had daughters first, especially since they wouldn’t have been important enough to mention. Also, Adam had another son, Seth, when he was 130 years old and then he lived another 800 years. Say what you will about our progenitors, they knew how to get lead in their pencils. The idea here is that after a short period of time you’d have scads of humans running around and plenty of broads to choose from, were you Cain or Abel, although they’d all be pretty seriously related.

Which is obviously appalling, or at least frowned upon in most of your modern cults. How can we reconcile this? Easy peasy. God never told anyone he couldn’t marry his own sister. Especially since he gave him no alternatives. God didn’t have a thing to say about that until he changed the rules and funneled them through Moses. Up until then it was fine. You can’t commit incest if there’s no such thing as incest, but after a certain point, as outlined in Leviticus, there were all sorts of rules. You don’t even want to know. Cain and Abel got in under the deadline.

So we can assume that Cain and Abel had carnal relations with their own sisters.

Nobody said they had to enjoy it.