How To Tell When You Need Brain Surgery 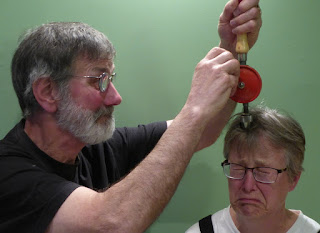 My friend Linda popped by the other day and we sat on the front porch in the sun and chitty-chatted. What was I up to?  Well, I was just trying to make a lasagna with skinny little slices of zucchini in place of the pasta. Oh? Did I use a mandoline? I didn’t. I used a grater. And then you salted and sweated the zucchini? Why no I did not. I don’t like to sweat anything. Ha ha! Well Linda’s a great cook and we batted around a few more ideas about dinner and talked about the weather, which had just turned nice. I’m surprised you’re not out in your garden on a day like this, I said to Linda.

Oh, she said. I’m not supposed to bend over at all because I just had brain surgery. 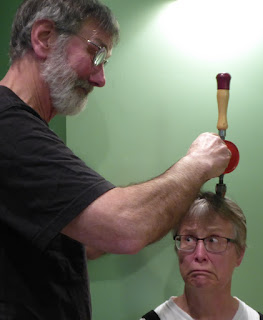 Let me just say right now that if you just had brain surgery and you do not lead with the information that you just had brain surgery, and instead you toss out that little tidbit twenty minutes in, it’s definitely a sign you needed brain surgery.  If I were facing brain surgery, everyone on my Facebook page would know about it well in advance. I would collect hopes and prayers and secretly hold out for offers of baked goods. I would start out with a wry statement, preferably including a pun of some sort, designed to make me look upbeat and resigned in the face of fate. More posts would follow in the ensuing weeks, any of which would serve in the capacity of last words, in order to keep my impending brain surgery in the minds of all. The closer I got to my brain surgery, the more philosophical my posts would become, with an undercurrent of desperation detectable only by my closest friends. The second to last post would just be oh mommy oh mommy oh mommy followed by a brave and somewhat flippant statement demonstrating my cheerful non-belief in an afterlife and including, preferably, another pun, just in case I wouldn’t be capable of coming up with one afterwards, and then as soon as it was over I’d be all over the internet whooping and hollering again. People on the other side of the planet would know I had brain surgery. Small woodland creatures would gossip about me amongst themselves.

Linda got brain surgery by dumb luck. She had the dumb luck of mixing up her prescription meds and took a mess of Conflagra when she thought she was hoovering Lixavixen, and she went all loopy. Her husband Pete was worried and hauled her into the ER and by the time they’d finished looking for the nonexistent stroke, they’d unearthed a brain aneurysm and a companion carotid embolism all plump and ready to pop. Well, there are all kinds of things that people say are not brain surgery, but brain surgery is not one of them. They kept her for days and did some head-drilling and some flipping-back of skull bits, but the actual brain surgery was conducted from an entry point in the crotch, even though she’s not a Republican. They used wires and cameras and intuition and, in this case, Obamacare.

I’ve heard of this kind of thing before. Gal goes into the doctor complaining about tipping over too much and they go to town on her, looking for some neurological nightmare, and accidentally stumble over an arsenic-laced land mine of a tumor in her left butt cheek, and excavate it, and she comes out good as new and with a slimmer line.

So that’s my advice. Fake a stroke and add in some symptoms that make no sense and go to the ER and let them have at you. They’ll be entertained, you’ll be thoroughly checked out, and it might not even cost much. Although I’d hurry.