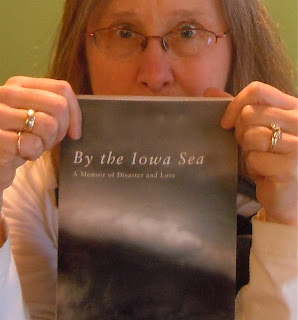 Here’s what my friend Jim said: “Joe Blair carves out a place in your soul. Too bad it hurts.”

You’ve never seen a book review on this site, and I don’t want to start now. So I’ll finish now. Joe Blair’s first book is for sale. You should buy it. Joe Blair tells the truth better than anyone I know. By The Iowa Sea is a memoir, but genre doesn’t matter much to me: if something is well written, that’s all I ask of it. You can write about pod people or you can rip bodices, but be sly, be graceful. Choose the right words, and I’m yours. Joe’s words take my breath away. They remove the last defenses against understanding his life.

And what’s to understand? The facts are these: Joe and Deb married with the usual optimism, assuming that great desires as well as mundane joys would be fulfilled. They had four children. All children rearrange one’s future, but their fourth, Michael, stole theirs. Severely autistic, sweet, and infuriating, Michael requires 24-hour care and more love than most people know they have. And he tests that love every day. For Joe, the prospect of an affair presented a glimpse of a less-burdened future, and he found it irresistible. But it’s not the end of the story for a man with the habit of truth.

Here’s how you know a great writer: his words change you. I don’t even know how Joe does it. We were introduced by a mutual friend that at least one of us had never met, on Facebook, through an earlier association with a grand online literary experiment called FieldReport, and–well, as they say, it’s complicated. One day Joe posted a link to a piece he had up in the New York Times “Modern Love” column. It staggered me. It was about his son, his almost–almost–unknowable son. Yes, Joe and Deb’s future has been derailed by the demands of the boy’s care, but their duty goes deeper: someone is living in Michael’s body, and they bear the responsibility of learning who it is, because no one else will. This falling tree will make no sound unless they are there to hear it. It takes a lot of love to fend off despair. And there’s no guarantee there will be enough of that to go around, for the other children, and for each other.

He doesn’t put it this way, of course. He’s not fancy. He lays out his hopes, his assumptions, his desires. And then, right next to these, his reality, sliding in so sharp we don’t feel it going in. He leaves out the extraneous introspection and the philosophizing, and trusts his reader to inhabit the space between the life he wanted and the life he has. And because we do that work ourselves, we are there.

And because it is reality, it is not without humor. If Joe wasn’t funny, he wouldn’t have lasted this long. His readers will not be unscathed, but he has mercy on us.

Memoir sometimes makes me cringe. Sometimes the author names names and scatters rage; other times he seems to be working towards absolution by extravagantly blaming himself. Me, I can’t write it. I am not willing to own all my truth, let alone tell it. I can express grief over the loss of a well-loved soul, but I am loath to reveal much about the living. It’s hard to tell what Joe might leave out–certainly not his doubt, his exasperation, his failures, his infidelity. But instead of cringing, I’m on his side, on the side of his family. Because his aggravation is threaded through with forgiveness. He even forgives his son, who is innocent of malice. Forgiving the innocent may be like cleaning soap, but he does it–must do it–anyway. And every day. Even rarer, he forgives himself.

There’s no melodrama in here. This prose is simple, supple, and valiant. Here’s one truth: muscles cannot grow stronger without something to resist. And Joe Blair, because he must face his responsibility and his burden, is able to learn how large love can be, in a way that those of us of whom less is asked may never do. That’s really something.

I’ve been proud to have Joe Blair in my skinny blog roll for a while now. If you would like to see why I’m so fervent about him, here’s the New York Times essay that shredded my heart. And here’s how you can order By The Iowa Sea.


We will return to our regularly scheduled snortfest on Saturday.