I Do Too Cook 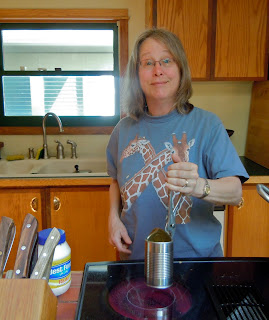 Shortly after we met, Dave was standing slack-jawed in my kitchen, watching me cook my dinner. I had stripped the label off a can of peas, cracked the lid, and was holding it on the burner with a pair of pliers. When it was heated through, I strained the peas through the lid, opened it up the rest of the way, stirred in some mayonnaise and dug in. My can was ready to recycle and I’d only dirtied one spoon. I figured the look on his face was one of admiration.

Dave has been responsible for virtually every meal we’ve had since, and it’s been thirty-four years. He’s gifted. When he goes away for a few days, I peer into the refrigerator and come up with nothing. I eat peanut butter and when he returns, I tell him there’s nothing to eat. He starts pulling out this and that, and in no time at all he has assembled a delicious and attractive meal, and if all the neighbors happen to drop by at once, he’ll feed them too. Jesus never did any better.

Once Dave fell ill and lay moaning on the sofa for days. I polished off the peanut butter and then asked him if I could make him a little something. He allowed as how he might be able to get down a piece of dry toast and a poached egg. I looked up “poached egg” in the Joy Of Cooking–most people don’t bother–and it said to bring five quarts of water to a rollicking boil and stir it into a “mad vortex,” at which point you drop your egg into the center. Well, it takes a while to get that much water boiling, don’t think it doesn’t. And when you drop your egg in, the whites go flying off at a tangent to the mad vortex and settle out as shrapnel on the bottom of the pot. I served Dave his by-now cold piece of toast with an egg like a golf ball on top, and said, “there, I hope you like it–it took me forty-five minutes to poach that egg.” Well, it was almost a miracle. He was up and cooking again in no time. 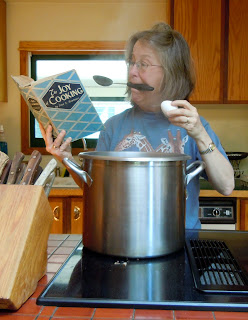 But I still contribute. I like to put a little of myself in all my efforts. The Pot Roast with Diced Root Vegetables and Fingertips in Plasma Sauce was splendid. The Lemon Custard With Knuckle Zest turned out pretty well; hardly anyone can guess the secret chewy ingredient in the oatmeal cookies (shredded rubber spatula. It’s never raisins. If you see raisins in my cookies, they flew in on their own.) Crunchy Mousse is even good for you: eggshells are loaded with calcium.

I’ve learned along the way. If something calls for being beaten “until soft peaks form,” that means just a little after the point when pigs are observed to fly. If you have a liquid on the stove and are instructed to cook “until reduced by half, about one minute,” figure on a half hour. In the case of custard, which you are to cook over low-medium heat until thickened, you can go ahead and do that all day if you want to but then you have to crank the bastard up to high and swear like a sailor. If you then pitch in a cup or two of cornstarch, you can get that puppy to stand right up and bark.