I Feel Flitty, Oh So Flitty 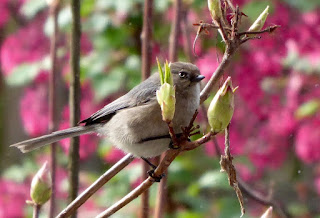 If you see a really cute little bird about the size of a tailed ping pong ball and you decide it’s a bushtit, you’re probably wrong. Bushtits don’t come in ones. You see a solitary bushtit and you’ve just seen the saddest thing on the planet, this close to dying of lonesomeness. 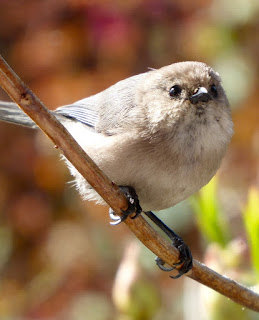 We’ve got a neighbor like that too. He likes to sit on his front stoop and his buddies show up and after a while they’re a wee bit likkered up and then they’re jabbering all over each other, happy as clams at high tide. It doesn’t seem like they could possibly be listening to each other, but they probably are, and it’s exactly the same with the bushtits. You might get thirty of them in a bunch and they even go to the bathroom together. Of course, birds are going to the bathroom all the time.

So if you do have a genuine bushtit, you’ve got a raft of them all going off at once, and the only exception is right about now, during mating season. That’s the only time they pair off. I don’t know how the female chooses a mate but I don’t think she can go wrong. If there’s something she likes about one male bushtit, it’s likely to be equally right with all of them.

I particularly like bushtits because unlike some people I could mention (I’m looking at you, Marge and Studley Windowson), it’s real easy to tell the boys from the girls. The boys have sexy brown eyes and the girls have haunting yellow eyes. They’re always being described as “drab” but that’s only because brownish doesn’t strike a lot of people as a color. Even when it’s soft mouse gray and chocolate Necco candy brown.

Anyway, the bushtits, in a burst of springtime inspiration and hormones that they would otherwise not know what to do with, do pair off for just as long as it takes to get a nice nest started. It’s a woven sock, maybe a foot long. There’s a hole in the top of the sock for entry and then a little passageway to the bouncy bottom part. The suckers are so well constructed, using lichens and grasses and fur and spider silk for the Spandex effect, that they are still intact the following spring and even the one after that, but nobody uses it again. They start over. Everybody likes a good project. And there’s always lots of help. That’s unusual among birds.

The female does most of the work on the bottom part where the eggs will go, and probably turns the heel, and the male works on the rest. They might spend a month at it, but as you can probably guess, that’s a long time for bushtits to go without the whole gang, so at some point all the unmarried members of the flock show up and pitch in. Is there anything cheerfuler than a sock full of bushtits? Nobody knows who’s who for a while, but eventually the eggs drop out of one of them, and she and her mate both sit them, and meanwhile the hangers-on are all in there too. They should have knitted panty hose.

Two of these photos are courtesy of fellow Portlander Mary Jansen, a Friend Of Pootie and spectacular artist.