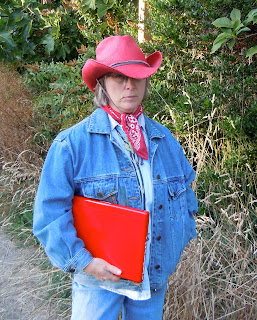 I’m fresh off the Willamette Writer’s Conference here in Portland, where upwards of 800 other brilliant, ignored writers convened to learn the intricacies of subplots, polish their prose, and conspire to make sure no agent enjoyed an unmolested moment. Every attendee harboring a screenplay or a novel was desperate to find that one missing piece: the champion that would recognize the worth of her output and grease her path to acclaim. We are writers, with massive if mythical audiences, and we lack only the final link of representation to stand in the golden sunbeam of glory that is our due.

Well, close. Turns out we are content producers, and we lack only the will to tweet. In workshop after workshop we were implored to become web wranglers, riding the range of publicity and gathering our herds. Today we tweet! Tomorrow we will honk, or gabble, or yawp, or chase whatever tumbleweed will have replaced Twitter after it rolls out of favor. The news left the cohort in my general age group a little deflated. Our brains have changed since the days they were open to learning. They have already undergone a sort of fossilization process wherein the soft young spongy parts are gradually ossified into kernels of rigidity and grumpiness. All right, tweet we shall, if tweet we must. But there’s a daunting array of buttons to push to make this happen and we’re not at all clear about how this is supposed to work anyway. I did what comes naturally when I’m faced with a lot of stuff I don’t understand. I retreated to something I did understand. I went off to take a dump. The toilet has always been the scene of some of my most reliable content production. 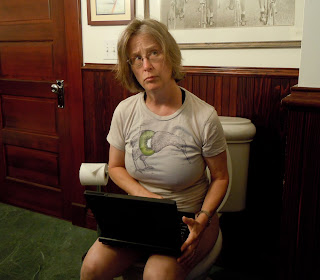 The bathrooms at the Sheraton are shiny and clean and freakishly eager. Anything you walk by is liable to go off. Paper towels grope towards you, water shoots out and soap oozes and beckons. I tried waving my hands in front of the mirror but my youth and acuity did not return. I chose a stall and sat down to ponder my literary fate. When I got up again to recombobulate my underwear, the toilet flushed for me. I should be grateful, but I am disturbed. I prefer to be more closely in charge of the flushing decision. There is only a thin line to cross before my appliances begin to judge me, and I get enough of that attitude from my computer. Worse, the toilet made only a half-hearted horking hairball sound. It was a premature evacuation; it didn’t quite do the job. So I looked for a handle or button.

There’s something about this situation. Even though I was the producer of the contents of the toilet bowl, and had been in their immediate vicinity not a minute earlier, somehow I was loath to actually sit back down on the seat. Evidently we achieve emotional separation from our effluent very quickly, because I was now looking at it as though someone else were to blame. I did a version of the chicken dance and prepared to give up, timing my exit such that there would be no witnesses. But in the act of opening the stall door, the toilet, which is probably still chuckling with its buddies at its own convention, went ahead and finished the job. “And then I got her to waggle her fanny at me,” it says, munching on a toilet cake. “Dude,” its buddies say. 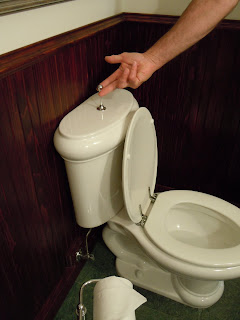 The fact is, there are certain things, and one thing in particular, for which you want your home toilet. Your home toilet might not be as good, but you’re familiar with it. You have mastered the details of handle-jiggling and the toilet’s own digestive limitations. And if something goes wrong, it’s just between you and your plunger, and no one else needs to know. One of our toilets is delicate. The handle is more of a nipple and needs to be stroked upwards with a precise degree of care. Strangers using this toilet are more apt to yank on the handle, causing them instant regret and an intense yearning for their own home toilets.

There is no reason to expect the toilets at the Sheraton to stay mired in the past just to soothe my aging sensibilities. Time marches on, in the writing and plumbing worlds. I might think my shit is good, but I’m going to have to learn where all the new buttons are to get it to go anywhere.