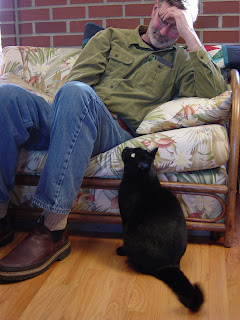 Dave and I just came back from Kaiser, where he underwent a surgical procedure to evict a cyst from personal territory. The cyst was benign but uncomfortable. For Dave, that is; the cyst itself was probably snug as a bug. Everything seems to be okay so far. The entire admitting process was reassuring. A series of folks in scrubs came in to ask questions, one after the other, pretty much the same questions, all designed to make sure they had the right person on the gurney and were all planning to do the same thing in the same location. When you’re operating in highly personal territory, you want everyone on the same page. So everyone who came in wanted Dave to tell them who he was, and they all got the same answer, even after they’d slipped the joy juice in his I.V. and he might have been inclined to claim he was the king of Siam. And they asked him the same question I get with every Kaiser visit: is there anyone at home you’re afraid of? “Absolutely,” Dave said solemnly, and the nurses glanced at me and burst out laughing. (Note to self: develop an edge.) Anyway, all personnel were professional and cheerful and calm, and there would have been no reason to feel anything but confidence except that Dave had already been in for this precise procedure four years ago.

After that one, there was plenty of discomfort and outright pain and it went on for weeks and weeks, until finally–not wanting to seem like a complainer–Dave called up his surgeon with a few questions. The surgeon was dismissive. He explained that he’d done this to that and so of course there was going to be some pain. Now Dave is not a whiny man, and doesn’t care to have it implied that he is, and he does have a high tolerance for pain. I mean, he’s not going to sit through a Michael Bolton concert or anything, but still. So he carried on best he could for a while and when there was still no relief, he insisted on an ultrasound to check things out.

The ultrasound technician said everything looked just fine. “Except for this cyst over here,” he added, “but it’s benign.” “Benign” is all well and good, but “begone” was more what we were going for. It was as if the surgeon had plunged down to the murky depths, pried open an oyster, snapped it shut again, and come back up with the bends and the willies, and when asked where the pearl was, said: “Pearl?” It all seems so pointless. It’s a lot of trouble for nothing. It’s going to Paris for a Big Mac.

So this time we arrived wary and lawyered-up. Not really; we’re not litigious sorts, but between the last surgery and this surgery, our nephew had passed the bar, and that should count for something. He mostly represents condo owners who are suing construction companies for shoddy workmanship, which is not particularly germane to this case. But still, going with him seems like a better bet than threatening someone with our niece, the Peace Corps worker.

The surgeon came out to the waiting room right after this last procedure to tell me that everything went well. That’s what he told me four years ago, too. He sent us home with a bunch of bandages and a bucket of Oxycodone, but I should have asked for the pearl, too. The nurse in Recovery gave us instructions and supplies, and he also told me that I should be giving Dave foot-rubs, even though that’s nowhere near the surgery site. Dave’s home now, resting up, but our cat, Tater, with her unerring instinct for the exact square foot in the house she is least welcome, is sizing up his lap, tail twitching. If anyone needs me, I’ll be a half mile down the street.