I Used To Be Fun-Size 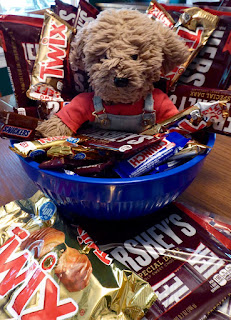 We have a situation.

I can only compare it to the similarly trauma-induced Toilet Paper Closet that my mother maintained faithfully until her demise.

Mom sailed patriotically through butter rationing and she was fine with painting the seams on her legs in lieu of stockings but she never got over the toilet paper shortage in World War II, and as long as I can remember her linen closet was stacked to the ceiling with toilet paper.

We, on the other hand, are living with a pile of Halloween candy that could block out the sun. The new topography of our kitchen counter shows up on LIDAR. The center of the pile has probably achieved composting temperatures by now.

It all goes back to a Halloween forty years ago when we bought what we thought was a reasonable, even plentiful, amount of candy and discovered, an hour in, that we had way undershot. Worse, most of the kids on our porch were dressed up as eighteen-year-olds with scowls and pillowcases. Some of them held out second pillowcases and demanded “one more for the baby at home.” This wasn’t fun. We phoned our neighbors to see if they had any extra candy and they were panicking also. Someone made a trip to the store to find shelves bare of everything but Tic-Tacs and tiny eyeglass screwdrivers. It didn’t occur to any of us that we could turn the lights out and hide under the bed.

So ever since, we’ve gone way overboard, even though nothing like that ever happened again. Dave wanted to buy candy early, but I know that trick, and I held him off until about two weeks ago. Then we got a few dozen full-size bars. Dave likes to give the immediate neighbor children full size bars, and then it doesn’t seem fair so he gets a bunch more full-size bars, and really we don’t have that many trick-or-treaters anymore so they might as well ALL get full-size bars. And then we got a couple bags of fun-size bars just to be on the safe side. And we waited.

Then I noticed that the bagged bars were not fun-size after all, but even smaller and presumably even more fun. They were basically only a square inch of candy bar each. Which meant that it wouldn’t be that big a deal to go ahead and open it up and pop a few in our mouths. A few here, a few there. How much trouble could I get into, especially during World Series season when I’m already eating salted peanuts in the shell for dinner and praying for a sweep so my colon can recover? The day before Halloween, after we’d gone ahead and opened up the second bag, I was at the store and decided to restock the stash just in case we ran low. The lady right around the corner said she’d gotten five times as many kids as we did last year, and on the Alameda Ridge a few blocks away word was they got 300-400. I got another couple bags of actual fun-size bars, and then another couple just in case. 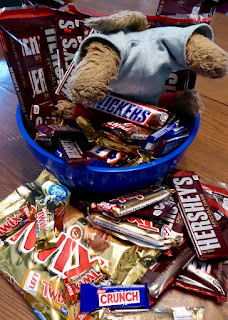 Not sure what happened after that. We stuffed all we could into the cabinet and some of it whelped. There was a Baby Ruth and a Snickers left out on the counter and Jesus showed up in the middle of the night and loaved and fished them. Then we had three bowls the size of God’s satellite dish filled with fun-sized bars with itty bitty bars to spackle up the spaces plus a solid forty full size candy bars not including the twelve we thought were full size but turned out to be packages of eight fun-size. Each.

The six small children who showed up did real well.

The good news is I’m finally out of salted peanuts in the shell. Should have bought some more toilet paper, though.