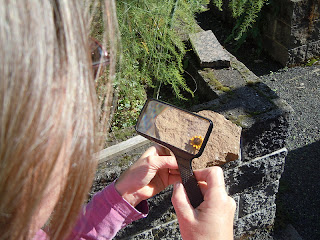 Australian paleobotanist J. W. Schopf says he has found the world’s oldest fossils, the traces of single-celled organisms 3.4 billion years old. Other Australian scientists disagree. “No you di’n’t,” they pontificate. So there’s controversy. The second set of scientists has set up camp a few miles away and they think their fossils are the oldest. The whole issue is fraught. It’s hard to imagine picking up a rock and squinting at it hard enough to see a fossilized single cell that dated from the sulfurous primordial ooze. Maybe that’s what it is, but it could totally be petrified schmutz or retinal floaters or even something the guy only sees when he’s coming down off a toot. You’ve really got to want to see something like that to see it at all. I can’t even track my own point through a two-minute conversation, and these guys are finding stuff that used to be alive before dirt was invented.

That doesn’t mean it’s not so. Joe America tends to scoff at such reports, but Joe America can’t even find his own happiness without a remote control. Scientists are always drawing conclusions about things that can’t be seen. The Higgs Boson, for instance. A whole lot of people have put time and money into finding the Higgs Boson. No one has ever seen a Higgs Boson, but they figure it must be around somewhere because otherwise we wouldn’t have mass, and we know we have mass because we keep bumping into each other. The Higgs Boson, and the honorable quarks, are invisible things that are presumed to exist because their existence explains the observable forces, such as electromagnetism and gravitation. Scientists proposed their quarks and gave them splendid names, which always gets them extra points in my book: Up. Down. Charm. Strange. Truth. Beauty. (Truth and Beauty were later renamed Top and Bottom to better account for the forces of dominance and submission.)

So you can’t see a quark, or a boson. But you can prove their existence by flinging a bunch of shit at them really fast and seeing if they duck. That’s what they’re doing in the expensive particle accelerators. They’ve done well with the quarks, but they’re starting to wonder about the Higgs Boson. They’ve chased him into a corner and if he doesn’t show up they might have to conclude he doesn’t exist at all. Which would be dreadful. We’d be like the cartoon coyote that runs over a cliff and makes the mistake of looking down. We might just disappear. What if there is no Higgs Boson? What if we should have been looking for the Higgs Splorknit all along?

It may seem silly to make something up and then go looking for it, but it’s not uncommon in the sciences. Even in economics, people earnestly go on and on about the Trickle-Down Effect even though there’s no evidence for it at all. They have to propose its existence to explain why they have all the money. It’s easy to test the hypothesis. All you do is take the combined assets from millions of people engaged in honest labor for decades and invest it hard and fast until it smacks into something, scatters, and disappears, and thus you can infer the existence of extremely rich people, even though you’ll never see them. But we’re all scientists at heart. We see forces in the world that we don’t understand, so we postulate whatever we can to explain them: socialists, elitists, and evildoers. Or corporate overlords, fascists and fundamentalists. Take your pick and start looking, and you’ll see them everywhere.

I have an affinity for science, but it’s still tough to comprehend. When I’m in doubt, I throw in with whoever comes up with the best wordage, like the guy who named his quark Charm. I’m glad they finally found Up, Down, and Strange; maybe they’ll discover Pudge and Flappy some day. So I don’t really know which of the paleobotanists in Australia has come up with the oldest fossil, but I’m going with Dr. Schopf. He says he found his fossil stash in the Apex Chert of the Warrawoona Group. That’s good enough for me.