I’ll Just Do Them By Hand 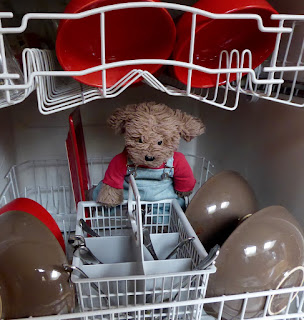 I’ll be the first to admit I don’t have much talent for spatial visualization. I park my car using audible data from the curb. I routinely look at something bigger than my head and think “I can eat that.” Also? Your dishwasher doesn’t make any sense to me. I don’t care who you are.

There’s a section on the IQ tests where they show you a shape in two dimensions and you have to figure out what it would look like folded up. I can’t do that. I can’t tell if it will be a box, a swan, or a dreidel. If it weren’t for the verbal comprehension part of the test I would’ve been institutionalized. I used to try to cut out shapes to sew my own stuffed animals and they all came out sad and flat. It was like I had a nice store-bought collection of animals and a separate roadkill set.

But your dishwasher doesn’t make sense. There can’t be that many dishwashers on the market. No two are alike, except that there’s no figuring them out. I know what to do with my own, now. I’m sure it didn’t make sense at first either, but after a while, you figure out what goes where from experience. If you load the plates here, there’s no place for the bowls. If you stick the big bowl there, the little shallow one won’t fit along the side. It’s very personal.

Our friends KC and Scott are major food people. When they remodeled their kitchen, they went ahead and put in two dishwashers. That never occurs to most people. They were not about to hand-wash the cooking pots, or stack dirty dishes waiting for the first batch to get clean, and that was that. Regular people design their kitchens so that they’re standard and ready to sell to someone else. The four of us are not regular people. (Dave’s countertop is six inches higher than standard, and we have two refrigerators. One for the beer. If the next people want something different, they’ll have to nuke it and start over.)

They should make dishwashers with cut-outs like those old hand-tool pegboards. I am paralyzed by the sight of foreign dishwasher pegs. They look like a shishkebab assembly line. I see the basket for the utensils, but are my friends handle-up or handle-down people? Do they spear the glasses or slip them between the peg rows? What are the rules?


Once you decide on, say, where a plate goes, you can keep on stacking them in there in parallel. But they might be on the diagonal and you’ll end up with unused corner space. If the proprietor of the kitchen happens to come by while you’re puzzling, he’ll invariably hover and tsk and twist his hands, and finally say “Usually what I do is…”

That’s the key right there. It doesn’t matter how you put the dishes in. They’re just going to get rearranged after you leave.