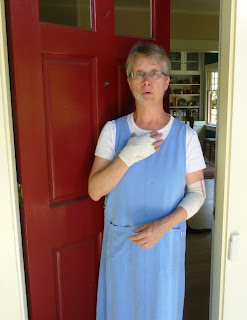 There was a knock at the door. It was the Fuzz, but I didn’t cheese it.  I’m a white girl, so cops don’t scare me.

“Come on in. What can I do for you?  Ooooo, don’t shake that hand. It’s pretty sore. What? Oh nothing. Just a bruise on my palm, and, yes, now that you point it out, there is a little abrasion there. Nothing major. You should see my elbow!

“What? No, I just fell down again. I fall down a lot. At least I didn’t hit my head this time! Nothing to hurt there! That’s what my husband says! Ha ha! So what can I do for you?

“That? Oh. I didn’t realize I was that loud. Which neighbor called? You’re not allowed to say? That’s all right. I was just trying to tell my husband to let go of me, but he wouldn’t listen. He was taking a washcloth to my elbow, here, trying to scrub it clean, and I guess it’s pretty bruised too, and I might have screamed a little. But that’s what you want. You want a guy who won’t listen to you when you tell him to stop, if you’re ever going to get cleaned up properly. 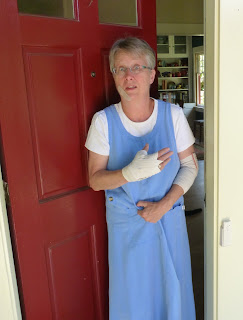 “No, no, like I said, I fell down again. Right in the street! I fall down a lot. Ask anybody. I even blog about it. There was the time I whacked my head falling on the frozen lake. And the time I fell face first onto the sidewalk when I tripped. And the time I fainted and knocked myself out hitting my head on the wall of the bedroom. I could show you the divot. And all those times in the woods. I just don’t pay attention where I’m walking, I guess. I’m such a clumsy ninny!

“Oh, and crazy stuff. Like when it was Leap Day and for some reason I decided to demonstrate Leaping in its honor and tried to do a 360 twirl in the air. But I can only jump about three inches and came down about 270 degrees short and landed wrong and bam I hit the pavement again. That one was hard to explain to people! Ha ha! We joke about it all the time. ‘It’s a good thing you’re so short,’ my husband tells me. ‘You don’t have that far to fall.’ And that’s true. Sure go down like a ton of bricks though. Hey, we even had ‘Short People’ as the first song we played at our wedding. No, really! It was my husband’s idea. You know it? ‘Short people got no reason, short people got no reason to live…’ 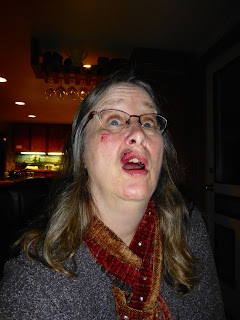 200 pounds, I guess. So, sure, he’s big, but not like football-player big. Pardon me? Like Ray Rice? Don’t know him. No, not really. He played a little in grade school but he’s not really the football type.

“I take your point. He’s a lot bigger than me. Who isn’t? Ha ha! But he would never hurt me. Not on purpose. Well there was that time I got a split lip when he picked me up and turned me upside down to shake the change out of my pocket, and he lost his grip, but it was no big deal. And I totally deserved it. He kept winning in cribbage, and I’d never pay up. What? No, I wouldn’t say he was angry. Just going after what was rightfully his. If I’d just paid him he would never have dropped me on my face.

“Sure, wait just a second. He was right  here. Dave? Dave, could you come here a minute?