…In Which I Introduce The Adjective “Penish” 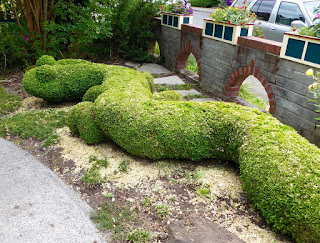 So I was just taking a break from the annual shaping of my topiary boxwood salamander and I decided to go around the corner and buy some new shoes, and I found some, and put them up on the counter, and got my credit card out, and the nice lady said it sure was a nice day, and was I was doing anything special on such a nice day?

And I said no, I was just shaving my salamander.

And it got kind of quiet, giving me a chance to reflect that that might have sounded a little dirty.

And then she told me to go ahead and slide my chip into the bottom end.

So I figured we were even.

The transaction went smoothly after that. She said she liked those shoes, because they were so comfortable, and I thought that was odd, because why would anyone buy uncomfortable shoes? Then I realized it was probably just one of those things people say, and I smiled and picked up my shoebox and turned to go.

“Have fun with those salamander whiskers,” she said, and I’m all, whuh? Who thinks salamanders have whiskers? What are they teaching kids these days? 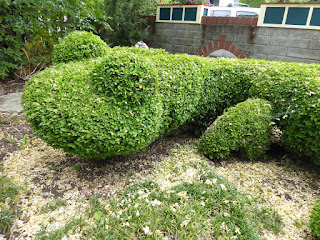 It’s bad enough that I have a twenty-foot boxwood salamander right in the front yard and no one ever notices it. Admittedly, I have it facing away from both the sidewalk and the entrance path, because I have a thing for subtlety, but still. People’s eyes skim right over it. I believe their brains register it as a low hedge. You know: a low hedge with four legs and visible parotoid glands. As if.

I get why people don’t always pick up on the topiary frog in the back yard. Especially after that time I accidentally lopped off his right front leg, which took a while growing back, and after last winter, when a load of snow produced some slumpage on the right side. Sensitive people are naturally going to look away from frog slumpage.

Then I had one of those moments of grace wherein it occurs to me that people aren’t stupid or mean so much as they’re underinformed, and then I took my moment of grace a notch higher and thought: what if some salamanders do have whiskers, and I’m being crabby for nothing? I visualized something on the order of the mustache on a catfish. Not hairs, per se, but little curb-feelers, perhaps something a blind cave salamander might make use of. 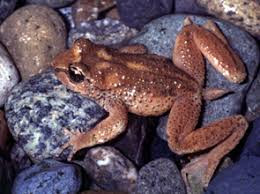 After all, there is a Tailed Frog right here in Oregon, and I didn’t know that was a thing until a few weeks ago. He doesn’t have a true tail, but he develops something that looks like a tail when his cloaca becomes genetically exuberant and swells up in a notably penish fashion. Nobody wants to call it the Penis Frog but that’s essentially what he is. With his fancy dangling cloaca he can actually insert himself into the female frog and fertilize her eggs internally. Your average frog mates in a nice quiet pond where he can dribble sperm over her expelled eggs and everything works out, but tailed frogs like to be in rambunctious water. If they tried standard external fertilization, the eggs and sperm wouldn’t see each other until they’d reached the Pacific Ocean and the whole enterprise would be even more of a miracle than it already is.

I looked it up.

No whiskers. There are lots of larval salamanders with frilly gills, but those are more muttonchops than mustache, and you certainly wouldn’t want to shave them off. That would be cruel.

But it all goes to show there are all sorts of things in this world, and perhaps I should be less judgmental about my young friend, the shoe store lady. Perhaps I should go back and thank her for the shoes, which really are exceptionally comfortable. Right after I finish shaving my salamander, and drenching it in fish fertilizer.

I probably don’t need to mention that.