It Is My Dooty To Report 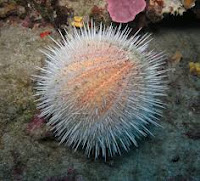 Reader and Friend Of Pootie Nisa Blackmon recently corrected me about a misapprehension I had concerning how sea urchins take a dump. If this is not the only blog you’ll read today that starts out like that, I hope it’s the first.

As she explained, they don’t really take a dump, at least not in the gravity-assisted way we have grown accustomed to. Their anus is on the top of their body. That seems like really poor design but we have to remember they’re underwater for the event, and presumably their effluent leaves the immediate area. Up until now I had not considered that the ocean is basically a giant toilet. This cements my determination to avoid it, especially as it is not airworthy, and I do not have gills.

Well. Under the circumstances it only makes sense to put the anus on top. Those circumstances being that the urchin’s mouth is on the bottom end, where it can hoover algae and such from various surfaces, and in general animals are designed to poop as far away from their mouths as possible. Flip yourself upside down to mow algae on the sea floor with your lips and you will note that your anus is on top, too. 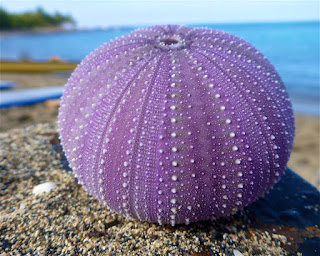 Urchins have five-fold symmetry, which is unusual in the animal kingdom. You’d think that if they were doubling up, however many times, they’d come out even. But they start out bilateral like us, and then the left side only gets busy and divides, and the right side stays put to be the oddball. We end up with a basically spherical animal, like Chris Christie.

It’s hard to argue with success. That anus arrangement has been going on for a long time. And individual urchins apparently keep growing, however slowly, until something eats them, such as a Japanese person. They can get to be a hundred years old, or even 200, with few signs of aging, which is understandable in a critter that starts out with sprouty hairs and dribbles poop on itself. What more could it do, keep the turn signal on? Scientists have learned a lot about their longevity by measuring the Carbon-14 in their little round suits, thoughtfully deposited during the nuclear bomb testing of the 1950s. They really don’t know how old an urchin can get, although science is intrigued by the discovery of a massive urchin with what is thought to be catapult dents.

Aristotle, who had the benefit of being a curious fellow in a time when nobody knew anything, studied almost everything, including urchins, and he referred to the purpose of the anus as providing “issue of the residuum.” I plan to work this into my vocabulary as soon as possible.

So there’s a mouth and an anus and lots of tubes inside for organizing stuff once it’s in there, but what about sex? It’s a little disappointing. Female urchins expel eggs that float freely in the water, and male urchins produce milt that can fertilize any eggs it encounters. This method is scientifically known as “jacking off,” or, if it keeps up for a long time, “on and onanism.”

It doesn’t seem like much of a plan, but urchins have been around for 450 million years. That’s a pretty good run for something that has an asshole at the top. Take heart, America.