It’s A Bummer About Peter Pan 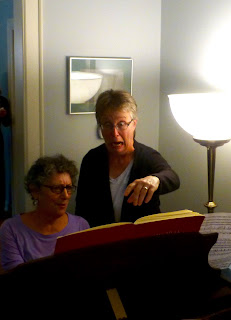 I joined a music performance group years ago. We meet in each other’s houses and play whatever we’ve been working on. The benevolent founder of this salon shanghaied virtually every one of the original members. We were scraped right off the streets, some of us. He’s an insistent guy, and doesn’t know how to take “I’ll probably throw up” as an answer.

It’s been a fluid cast of members, and on any given night about a dozen of us show up. At first I was relatively comfortable. There were many people much more accomplished than I, but there were also a few rank beginners and one or two who could be counted on to (praise Jesus) play woodenly, which calms me down. I can play very musically. I can do this when I’m alone at night on my home piano and there’s no danger of anyone actually listening. I can play the hell out of that instrument in those conditions.

Usually I don’t do that well on performance night. And over the last few years, all the lesser lights seem to have moved on, and I find myself surrounded by lovely people with master’s degrees in music performance. Opera singers show up. Clarinetists. Competitive teams of string players. It’s all gorgeous and memorable, and than it’s my turn to walk up to the gibbet, I mean piano bench, and, well–plink away.

But even the accomplished musicians figure I at least have what it takes to be a page-turner. I’ve been drafted on a few occasions. “My four friends the string players over here are going to spank the hell out of some Dvorak and Beethoven,” my pianist friend Carole said recently, “and all you have to do is turn the pages for me.” All righty then!

I can read music, I thought. I can sit back and watch my friend flinging out a bazillion notes and get up in time to turn that page, I thought. No problem!

Problem. Turning pages turns out to be just as terrifying as note-flinging. One false move at the switching yard and the whole quintet goes off the rails.  And it’s ever so possible. Do I have the next page under my fingers, or did I accidentally grab two? I’ve got one and a half measures to make sure.

And then there’s Beethoven, a well-known bitch. He sticks in something he calls a “movement” just for fun, but that doesn’t mean the movement is always forward. He sails into it for a bit and then repeats. Lurches ahead and then backs up again. Two pages in I need to whip back a page. A little later I need to whip back two pages. Later yet he wants me to whip back to an unrelated page, probably in the Dvorak, and only then does he get up enough momentum to go forward and keep on going. It is utterly terrifying.  The possibility looms that I will whip the entire score into the audience, where it will flap around like a spooked bat. 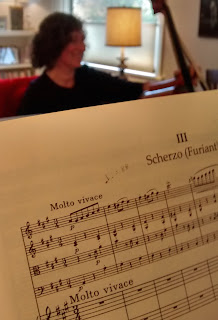 Even without the repeats, sometimes the musical pace is so torrid that my eyeballs can’t keep up. Here is a movement entitled Molto Vivian Vance which means, in Latin, that chocolate bon-bons are about to come down the conveyer belt faster than you can get them wrapped. And then there’s the other problem. Twenty minutes in, your friend and her friends, with no thought to your comfort, might start playing so damn beautifully that you’re caught up in the majesty of the moment, and suddenly you realize you have no idea where she is on the page. All you can do is scout ahead for a big stand-alone chord and hope she beaches herself on it long enough that you can get your bearings again.

It’s a horror.  At some point, when you’re in too deep to bail out, you realize that you are the invisible person up in the rigging who is solely responsible for making sure everything on stage happens as it should. And if you let go of one crucial wire, Peter Pan might go sailing end-over-end into the audience and splat into the balcony.