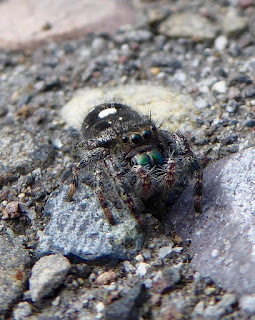 I don’t know much about the natural world. That’s because the natural world is really big, with lots of little things in it. I know more than most people, but probably less than a decent cross-section of my friends. You know how you’ll hear someone “wrote the book” on something? That’s not always metaphorical. I have friends who know so much about stuff that they can write authoritative books about it, in spite of which they tend not to be all that well-off, because they did not have the foresight to get into the more lucrative fields of pharmaceutical price-gouging or pension stealing, and failed to consider net worth when they were selecting their parents.

But not knowing much means life is a lot of fun for me. Because there are so many things I can still learn. Every day. All it takes is a little noticing.

For instance, I was noticing as I put on my gardening gloves that there was a little patch of spider silk, maybe the size of your thumbnail, right in the palm where there had been none just the day before. And there was somebody in it. Excellent! I thought. Clever little dude already caught some dinner. But then the dinner walked out. And I had to reassess.

I got my nose just about on it to ascertain it was a spider, and then I took a gorgeous portrait of it, and had to write about it. You can’t look at a little dude like this without wanting to know more about him. I usually assume most spiders I see are females because I have this notion the males are small and hiding out, trying to figure out how to get their rocks off without getting eaten, which makes them subject to existential dread and harder to spot. But I think this one is a male. And if he isn’t, one of my smart friends will jump in and tell me–just watch.

It’s a jumping spider! Also known as a Bold or Daring jumping spider. Lots of folks object to spiders jumping, but in truth, a lot of those people take exception to spiders even when they’re sitting quietly pondering stuff and not moving at all. I’m sympathetic, to a degree: I don’t believe snakes should climb trees or swim, but they do, so we have to just roll with it. And jumping spiders are so small they’re unlikely to be able to wrap their tiny faces around our fat asses anyway. Mine was a quarter-inch long, and don’t mess with me about that, because I am a quilter and I know my quarter-inches. But they’re the largest family of spiders there is.

The little thumbnail-sized patch of silk in my gardening glove is not a trap for prey. They construct them just to hole up in, of an evening. Or winter over in. Or stash some eggs in. They’re shelters. Next time it’s a little nippy out and you forgot your sweater, imagine that: you could have pumped a little pup tent out of your own butt.

So they’re not trappers, they’re hunters. That’s where the jumping comes in. And they don’t have musculature per se but a nice set of hydraulics in their legs and plenty of eyes for spotting things with. Plus, they attach an anchor line of silk before they jump so they can zoodle themselves back to where they started.

The famous Peacock spiders are jumping spiders, but even without the fancy colors, regular jumping spiders like my friend have an awesome courtship display. Legs shoot out straight, quiver, vibrate, bump and bounce: he’s drumming the whole time. According to Wikipedia, he does this because he doesn’t want to be considered food. I call baloney. I distinctly remember being an adolescent: the boys were drumming all the time. They couldn’t stop drumming. It was either that, or, you know.

Anyway the same source suggests that the female spider signifies her willingness to entertain by sitting passively in a crouching position. I’m not sure why crouching is considered to be passive, in a jumping spider. But hey. It’s his call.