The nicest lady volunteered to take a group of us out to the Gorge to watch salmon spawning. I was all over it. I figured she’d have plenty of practice spotting salmon, and I’d have a better chance of seeing them myself. But they weren’t hard to spot. There were a skillion salmon out there just having at it, and they did not care who was watching.

It’s a heroic little venture those fish have going. Zip out to the ocean, spend a few years, and motor back to the home stream just in time to spawn and drop dead. Reproduction is the usual collaborative effort between males and females, but it’s hard to see what’s in it for anybody. There’s a biological imperative operating, and whoever doesn’t get with the program is a dead-end kid, in terms of personal legacy. But what a shoddy deal. 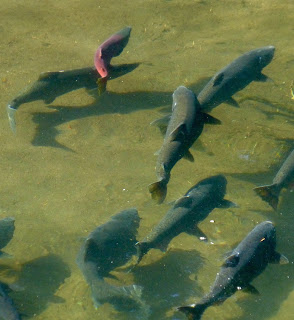 The female, at least, can look forward to dropping a lot of eggs more or less at once. That’s certainly an improvement over the human model, which is one long protracted interlude of bloat and dirty laundry without a lot to show for most of it. The salmon is going to have a shot at a couple thousand kids, but she’s not going to see them into kindergarten.

The way it works is the salmon make their way to the cold, fresh waters of their childhood. The females set about making a nest in the gravelly stream bottom. They do this by turning sideways and going whappity whappity whappity with their tails, cleaning the scuzz off the pebbles and sending the smaller stuff and silt downstream, until they’ve scooped out a  bit of a depression. The finished product is called a “redd” and can be observed as a clean patch of gravel in the stream bottom, as well as in crossword puzzles. Once she’s got everything just so, she signals a male from among the group hanging out nearby, and they sidle up to each other and she drops some eggs and he shoots his wad of milt and the female makes an attempt to cover the eggs and whatever doesn’t get eaten by birds or bears or other fish turns into salmon babies. Once the little guys are an inch long, we call them “fry,” which is just rude. It’s like calling piglets “roast.” 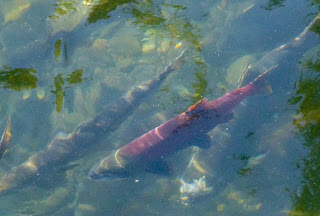 The female might do this up to seven times, always traveling upstream, and the disturbed gravel and silt from her whappiting float down and help cover her previous efforts. That part is slick. The nature of the motivation for the males is unclear. On his way to the spawning grounds, he grows a set of canine teeth with which he can take a nip out of the butts of competing males. So some of the thrashing we witnessed was females making a nest and some of it was males duking it out for the privilege of wanking off in front of a female. Because when he finally gets the word from a ready female, there isn’t anything like what we’d consider real erotic contact. They just swim side by side. The nearness of you, and all that. It’s got to be done; but it seems less like passion than, say, patriotism. And then there’s the whole dying part.

These salmon look beat to hell, and no mistake. They’re patchy and weird. They quit eating when they reach freshwater, and their stomachs crumble away. The females’ tails are shredded up from all the whappiting. They’re a mess. And besides that, they’re constantly dodging dead salmon floating downstream, which you would think would give them pause. But salmon, to their credit, do not suffer from existential dread.

Many of the salmon we saw looked, from the relatively good condition of their tails, as though they had died before spawning, which is altogether the wrong order of events. It’s been a rough year for water in the Northwest. It’s too shallow. It’s too warm. It’s too altogether missing.

But it’s all the same to the bears, who’ll take their fish dead, dying, or shiny. They haul them up into the woods, eat their brains, discard the rest, and poop, thus effectively redistributing nitrogen to the forest plants. You always knew what they do in the woods. Now you know why. They’re always thinking of others, bears.

Here’s a little video of our salmon, plus a bonus video of an American Dipper who thinks there might just be salmon eggs around (and he’s right):