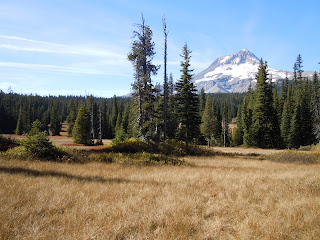 Dave and I are now Junior Tracking Specialists thanks to a three-hour course we took with Ranger Dan. Ranger Dan is earnest, energetic and so thin he needs to bounce around inside his ranger suit to touch cloth. And he has powers. Otherwise I doubt that we would have found ourselves, on any given day, crouched in the sand with our noses a centimeter away from a pile of rabbit doots and worrying them with a stick. Ranger Dan left little doubt that he might have ingested said doots if that were what it took to make positive identification. Ranger Dan was also young and trifocal-free and saw things that (A) we couldn’t see, or (B) weren’t actually there, and that’s powerful.

Our class was divided into three teams, each assigned a set of tracks in the sand to evaluate. Team One pored over a tableau of obvious deer hoofery in hard sand. Team Two had a collection of prints to peruse along with a pile of furry poop, all of it instantly recognizable as belonging to the dog family. They surmised coyote. Our team, consisting of us and a sullen eighth-grader who nonetheless failed to bring our average age down to within shouting distance of the other teams, was inexplicably assigned a patch of soft sand with something that may or may not have been tracks and looked like so much punctuation. We also found rabbit doots, and that’s what we went with, even though we were never certain we were looking at any prints at all. “That might be a print right there,” we said, pointing at a faint depression in the sand, while our teammate put on a thoughtful look that implied “I wonder if I’m missing any text messages.” 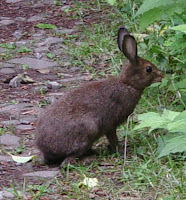 Ranger Dan concurred. “Rabbit, most likely,” he said, “do you see any claw marks?” We nodded ambivalently, unwilling to confess we couldn’t really see any tracks at all. Ranger Dan was now a centimeter away from our tracks with his bony rear in the air and pointing at them with a stylus. “See that right there,” he said, indicating a single displaced grain of sand in the correct rabbit-claw position. He stood up, getting the bigger picture. We were soon edified that one or possibly two rabbits had come over this way, paused, hopped around, and shot off that way, in something of a hurry. “Why might the rabbit be in a hurry?” Dan asked us, in the Socratic manner. “Something scared him,” I postulated. “Thus the doots.” 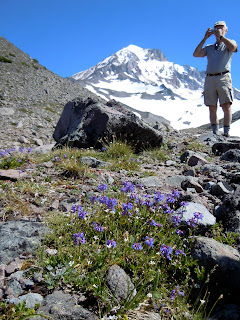 Ranger Dan also introduced us to the concept of our Zone Of Disturbance. This is the radius within which our presence affects wildlife, and if you’re exceptionally loud, it can be a pretty big zone. Dave and I never knew what to call it before, but we have an enormous Zone Of Disturbance. We irritate birds miles away. Wolves stay in Idaho because of us. We never shut up. We were hiking a while back and just finished commenting on how we’d never ever seen a bear, even though Mt. Hood harbored them, and our friend Tony, who is British, and was five minutes ahead of us on the trail, waited up for us and said, “See the beah? Lovely, that. Pip pip,” so there you go. Brits have had tiny zones of disturbance ever since the end of the Raj.

So when Dave and I took off on another hike on Mt. Hood the other day, and saw tracks, we strapped on our imaginary ranger hats and had at it. Cat prints, by the looks of them, accompanied by cat shit, furry and tapered, and in every respect like our own cat’s, only far, far larger. We ruled out Domestic Cat from the range map. The shit was still damp and shiny, and there was lots of it, so whatever had left it was probably nearby and had a spring in its step. What could it be? Like a cat, only far, far larger? We decided to try shrinking our Zone Of Disturbance for the first time in our lives and crept onward, silent.

Then we came upon a new set of tracks. These were abundant. They looked just like deer prints, only huge. We followed them for miles. They were different sizes: either some hoofed animal that traveled in packs, or one large jumpy one with four different size feet. We searched for more sign, and found one nailed to a tree. It was another hint. What could it mean? 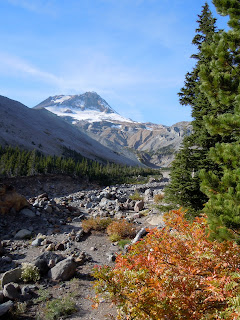 At some point we had reached the Timberline Trail and faced crossing Newton Creek, and we realized we might be lost, alone on the trail, with only three hours of daylight left. Cairns led us to the crossing, but the trail had vanished on the other side of the river. But we were Junior Trackers, not to be denied. Could that odd pile of rocks perched one atop another be significant? How about that pink ribbon tied to a branch? What ho, is that a rope hanging off the edge of the ravine? We followed all these clues to another clear trail, and when Dave, with unwarranted confidence, went bounding off in one direction, the final clue snapped into place: it had to be the other direction. Soon we were back in business, vowing the next time to use the old tracker’s trick of dropping M&Ms along our path so we could, if necessary, follow the chipmunk doots back.

Yet more of the mysterious too-large deer tracks. We scanned the woods to no avail, until finally, a half-mile from our destination, there was a great crashing and thunderous pounding and three enormous brown animals burst across the trail and were gone, faster than a digital camera can wake up and decide to operate. So there are no photographs to aid us in our identification, only the observation that if one of the critters had broadsided us, as seemed possible, we would have been seriously dead or flat.

We conclude they were Buicks.