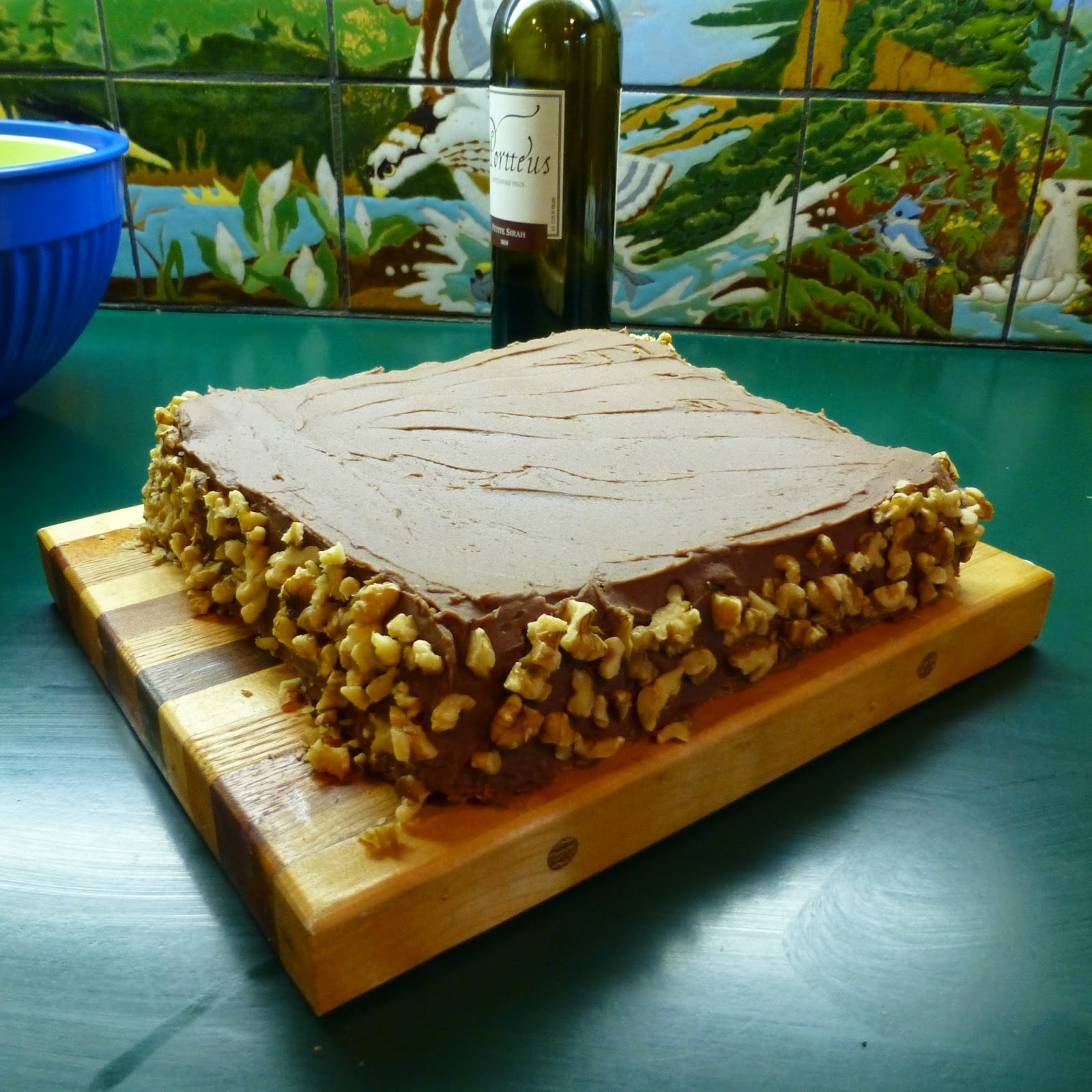 It must have been almost thirty years ago that the family decided we could probably shake up a few traditions without pissing off the gods, and we examined the Thanksgiving dinner menu with fresh eyes. That’s the kind of thing you’re allowed to do when your family traditions include items from the Jell-O and marshmallow families. Dave and his sister didn’t really like turkey, but the rest of us thought that was non-negotiable. Possibly even a matter of law. Punkin pie was mandatory also, but there could be a little wiggle room with other desserts. “What this dinner needs,” Susan said, “is more chocolate.” Or any chocolate.

I’d recently run across a promising-sounding recipe in a magazine I, as a letter carrier, was supposed to deliver, and printed off a copy of it at work at the expense of the stamp-buying public (thank you, America). I couldn’t remember what it was offhand but I offered to have a look. “Does it have any chocolate in it?” Susan asked.

I located the recipe under a rumple of papers on my desk. “Let’s see,” I said, smoothing it out, “it’s called ‘Fudge-Slathered Fudge Cake.'”

It was one of those recipes that starts out as a pain in the ass. You preheat the oven to 350 and then you find square pans and grease them and then line them with tin foil and then grease that and flour it and knock out the excess flour, and by then your oven is preheated and you haven’t even touched an ingredient. But the ingredients are tremendous. A pound of chocolate, a half pound of butter, eggs, sugar, walnuts, brandy, and two tablespoons of flour just to restore order and discipline. It’s still a bit of a pain in the ass but you can feel confident it’s going to be great, because chocolate butter sugar brandy. You do have to whip the egg whites and egg yellows separately and “gently fold”–god, I love that–the whites into your chocolate sludge. If there’s a way to do that without losing all the loft from the egg whites, I have never found it. Then you bake your two layers, and they puff up sort of randomly, and you let them cool overnight on a rack.

The next morning your little square cake layers look all stomped to hell. They’re lumpy and shrunken and flat as an old lady’s tit. Or so I’m told. It’s a panic situation, that first year, but hey–that’s what the frosting is for. It starts out as cream and sugar. You’re supposed to boil those and then reduce to low and let it bubble for ten minutes whilst “occasionally washing down sugar crystals from the side of the pan with a moistened pastry brush.” Like I’m ever going to do anything with a moistened pastry brush.

The frosting is fabulous and the cakes go together beautifully, with walnuts pressed into the sides for the jazz of it. It’s a hit. Anyone who ingests more than about a two-inch cube of it has to lie down on the floor for an hour, but it’s a hit. And a tradition is born.

The next year, and all the years after that, the cakes do the exact same thing, but by then you’ve realized that they’re only in the recipe to keep the fudge frosting layers apart, like a semi-colon holding back a pair of clauses. But the frosting doesn’t set up properly. You review your ingredients, find them accurately measured, and frost the cake anyway as is. After a while someone notices it’s crawling off the counter and heading for the hinterlands at a dead gallop. It’s a family effort to corral the frosting with a deft posse of fingers, and even if it doesn’t look like it belongs on a magazine cover, you still have to make it again the next year.

Discoveries are made over the decades. A few years in, I scribble a note in the margins: no need to grease the pans first. Duh. The tin foil slides right out. Some years the frosting works and some years it doesn’t. I finally realize it’s one of those heat things. It’s chemistry. Chemistry was my favorite subject but when it slides into the kitchen arena, it’s black magic. This frosting business is one of those candy-making deals where you have to check if your balls are hard or soft, and it’s all too embarrassing. At some point I recognize that my frosting works if I let it bubble at a higher temperature for a slightly longer time. I scribble that in my margins.

I could have taken a full degree course at a culinary institute and figured this out faster than I did on my own. But I’ve got it working now.

Dinner is great. Dave makes a plaintive and utterly futile motion that we have prime rib instead of turkey next year. That’s a tradition, too.