Just Put Me In A Speedo And Call Me Steele Johnson 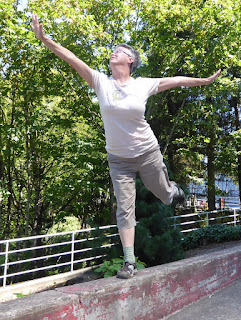 Ah, the Olympics! The very greatest athletes in the world are on display, flipping, diving, taking a stand against gravity, poinking flea-like into the air, and being named Steele Johnson. It’s impossible to watch all this human glory and not wonder: which of these events would I, personally, least suck at?

So many choices here. Track and Field is altogether out of the question. The starter pistol alone is likely to make me shit my pants and run in the wrong direction, which would suck. My only value to the team would be in the payoffs from off-track betting, where I’d produce a sturdy cash flow in the over-under for how many times I’d be lapped before I keel over at, if not beyond, the finish line. Even worse would be the power events. Your shot put, your discus, your javelin–all those things the athlete tries to get as far away from himself as possible? Not my sport. We learned this in softball when I’d run down a ball at the fence and pivot and give it everything I had, and it would ploop a lazy arc in the air and thunk down in center field. Not only do I have linguini where my muscles are supposed to be, but also I’m a little fuddled about the letting-go part. There’s no guarantee the objects I’m throwing aren’t going to land behind me. None whatsoever, Dave would agree–he’s the one with the imprint of the pipe wrench in his forehead. I’ve taken out my own teammates at horseshoes. For sheer entertainment value, watch that audience reaction when I spin with a discus! The second time.

Ordinarily you’d expect I’d be even worse at the swimming events, due to my inability to swim, but in reality I’m an all-around threat, competing equally well in the 50-meter freestyle, the 200-meter flappy-insect, and the thrash-and-sink. I can stand at the edge of the pool and wobble my arms like nobody’s business. And I am unsurpassed at that bit at the end of the race, where you cling to the floaty ropes and breathe hard and grab onto the person in the next lane. It’s only the middle parts where I struggle.

Similarly, I show some promise in beach volleyball, because I’ve had so much experience sticking my butt out, tugging at my underwear, and falling over.

That leaves gymnastics, where my lack of height works in my favor, if we ignore the hooter factor. Floor exercises are not likely to be a strong point. I have occasionally been able to complete 1/8th of a flip, which is remarkable given my three-inch vertical leap. Unfortunately, it is not distinguishable, from a spectator’s viewpoint, from a face plant. 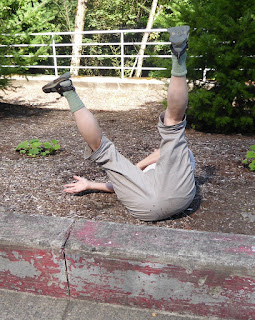 Which brings us inexorably to my best event. Yes: the balance beam. The balance beam is four inches wide and I am statistically certain to fall off a city sidewalk several times a year. I will be routinely awarded degree-of-difficulty points just for walking from one end to the other, due to my handicap (lack of ability). I will have a premature dismount just standing on the end of the beam doing the swishy ballet moves with my arms. And I will totally stick the landing. Not necessarily on my feet, but I don’t roll far.

I’m not aspiring to gold, anyway. I don’t want to fall off any podium higher than the bronze.