Justice On The Grill 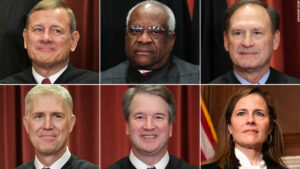 “Best July Fourth ever!” Neil Gorsuch exulted. “I don’t know about you-all, but I feel great. Here’s to our glorious Independence!” He skewered a joint of meat and hoisted it high.

“Beautiful day,” Samuel Alito said. “It’s nice to get out of D.C. What a swamp.”

“I don’t know,” Chief Justice John Roberts said, fretting. “It’s beautiful, but the optics are kind of troubling. You know? I mean, a barbecue for us at Mar-A-Lago? How does that look?”

“It’s a resort, John. It’s a national historical landmark. You have to go back to the origins. Always, the origins. Marjorie Merriweather Post built the place. What’s more American than Cheerios? Jesus. Enjoy yourself, for once.”

“So,” Alito went on, “Here’s to us! We got a lot accomplished. I mean, they say this was forty years in the making, but come on. We had one hell of a week!”

Gorsuch took his first bite of grilled meat and swooned. “This is amazing. Is this…polar bear?”

Alito grinned and waggled his eyebrows. “Courtesy our friends in the Arctic Shipping Route Freedom Foundation. They’ve almost got it navigable year round,” he went on. “We’re doing this bear a favor, ultimately. I’m told genuine Natives cleaned and gutted it for us. Gutted it like the EPA!”

“Delicious,” Amy Coney Barrett said. “Could use a little ketchup.”

“Ketchup, we’ve got. I’ll take the golf cart over to the main building. They’ve got vats of the stuff.”

“SHOTGUN!” Kavanaugh fished his keys out of his pocket, poked a hole in the bottom of a new can, and locked his rosy lips over it. Snap. Roberts ducked the spray.

“I don’t know, though,” Amy Coney said, thoughtful. “Everyone says there’s still going to be abortions. I keep thinking there must be something more we could do.”

Clarence Thomas’s voice was low but penetrating. “We arm the preborn. As soon as they’re far enough along to get a grip, they can protect themselves against the agents of Satan.”

Alito perked up. “Tiny guns! Brilliant. How are they going to get them in there? They’d have to slip them into the…into the…the hoo-hoo, you know, the lady’s Glory, right? I mean, how do they put in their IEDs?”

“No, not the roadside bombs. You know. The little contraception thingies. The IEDs.”

“Right. And then at least the unborn child can protect himself against a late-term assault.”

Amy’s brow remained furrowed. “Wouldn’t there be a danger to the woman? If her unborn baby started, like, just, blasting away?”

“No,” Alito said, waving his hand dismissively. “Ladies don’t feel anything on the inside. I’ve got that on good authority.”

“Sounds tricky,” Gorsuch put in. “But not impossible. As long as we get our knees off the necks of the entrepreneurial class, they’ll figure it out.”

“Or,” Clarence put in, “let’s think of this like it’s an elementary school. There’s only one way into the womb, so that’s a start. We could just rule that the woman’s entry hole be protected at all times. By her father, say, or her brother. Or any related male.”

Amy C was distracted by a movement in her peripheral vision. “You know, Clarence, you don’t need to wear your robe anymore. We’re on vacation.”

Clarence was sitting up on a lawn chair in his robe. The sleeves hung empty.

Amy C leaned forward. “Is that a hamster you’ve got under there?”

His smile vanished. “People will see what’s under my robes on the day of the Rapture and not a moment sooner,” he growled.

“RRRRAPTURE!” [snap, followed by a large thump and disturbance in the bushes]

“Anyhoo,” Alito went on, changing the subject, “at least we took care of that damn EPA. My God in Heaven, what a bunch of frigging nincompoops, pardon my French, Amy C. They’re all upset about global warming, when we already have the solution. Air conditioning! And how are we supposed to have air conditioning if we can’t use all the coal that God put down for us? Idiots.”

Gorsuch glanced over at the chief justice, who was nervously clutching his pool noodle. “Cheer up, John! You’re so subdued.”

Roberts set the noodle aside and, with effort, relaxed his shoulders. “No, it’s all good, it’s all perfect, but you know. You know me. I always worry people might think we’re getting a little pushy.”

The rustling came from behind the shrubbery. “GETTING A LITTLE PUSHY!” [snap]