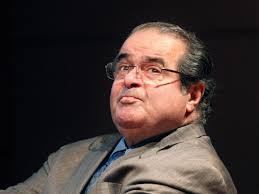 Well it’s always shocking and sometimes titillating when someone turns up dead who used to be alive, like, a few minutes ago, but there it was: Antonin Scalia’s big old face right there on the internets with X’s over his eyes, figuratively speaking. And I kind of went huh and I’ll be and went about my day, wondering about the circumstances (head first in a platter of manicotti?) and possibly humming Ding Dong The Witch Is Dead to myself–these things come unbidden, you can’t turn them off–and maybe I was humming out loud, because I was abruptly reminded that one is not to Speak Ill of the Dead.

I don’t know where that rule came from. Seems like once they’re dead that’s the perfect time to speak ill of them, when they can’t come after you by, say, accidentally sitting on you because you’re little and they haven’t been able to see their own dick for decades. But even if you have been speaking ill of someone for years, once he’s dead you’re supposed to stop.

“I don’t wish death on anyone,” people will say, primly, even though that’s usually followed by a big “but.” I’m just being honest here: there are all sorts of people I think could improve the world by not being on it. I’d trade a thousand poachers for a rhinoceros any day of the week and consider myself money ahead. Most of us are not all that crazy about the fact of our mortality and so we get all precious about the Big D. But my goodness: there are seven billion of us swarming this marble and we can’t all of us be worth saving. Nor would it be possible. I think Scalia has ceased to exist in any form but carbonaceous debris, but if it turns out he’s working on negotiations for the hereafter–they can get pretty baroque when you’re a Catholic–I wish him the best of luck, and a good lawyer. He knew some.

He was in the majority in the Citizens United case, touting the constitutional imperative of protecting expensive speech. Free speech, I mean. One imagines him dutifully appending his name (“Fondly, Nino”) to his Christmas cards to corporations without complaint, although he probably had people for that. I believe he would have defended the rights of gay fetuses, but one wonders. He wrote colorfully. And “jiggery-pokery” came up in the Obamacare dissent, not the gay marriage dissent. (At least it wasn’t “jigaboo-pokery.”) He eloquently enshrined traditional (one might say hidebound) viewpoints on the basis of their sheer historical persistence, but one can’t help but sense that his animus toward gays was entirely rooted in his conviction that they’re icky.

Oddly enough I don’t bear any personal ill will toward Antonin Scalia. I think he was pretty smart, and an entertaining wordsmith, which always puts people points ahead in my book, and he was consistent about his principles. It’s the principles that need to die, and since a lot of them reside in a particular generation, maybe it’s time to start getting that generation’s things in order, bequeathing the china, taking a load to Goodwill, and disposing of the photos in the underwear drawer.

So it’s not so much that I want to engineer anyone’s death. I can’t even skoosh a bug, but I’m not beyond suggesting that they’ve got to go sometime, and now’s as good a time as any.