Keeping Your Penis Clean and Dust-Free 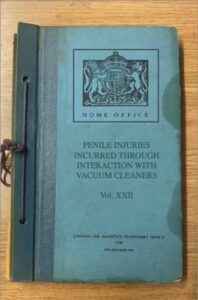 I suppose if I’d thought about it I would have realized there are penis injuries associated with vacuum cleaners, but until now the subject hadn’t popped up. It turns out vacuum cleaner penis injuries were common enough by 1930 to fill an entire medical journal. And that was before the invention of the beater bar.

And if I really thought about it, I would have guessed the first vacuum cleaner penis injury occurred within days of the invention of the vacuum cleaner. However, there is no record of it. The first vacuum cleaner was developed during the early 1900s and was so large it had to be hauled by horse. You could rent the contraption to vacuum your house one time for the about the same amount of money you would pay a junior domestic maid to work for a whole year. It was quite the mark of status, and resulted in no immediate penile injuries, unless those incurred at the hands of a junior domestic maid.

The smaller home vacuums much as we know them today didn’t appear until about 1915 and that might have been when certain people got notions. Nature famously abhors a vacuum, but Nature-Boy senses an opportunity. It’s not hard to picture. You, as an inquisitive gentleman, might find pertinent portions of yourself coming closer and closer to a suction hose of an appropriate diameter, and it becomes more and more effective, until suddenly you’re in a Chinese Handcuffs situation and pulling doesn’t help. 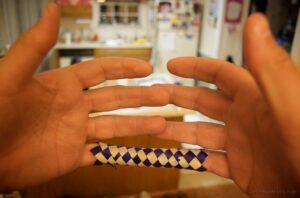 But grave injuries can and do occur, including the amputation of the head of the penis, although to date the reduction of dickheads in the general population remains negligible.

There are no reports extant of injuries sustained from using a crevice device to relieve constipation, but, as is the case with penile injuries, the phenomenon is no doubt underreported.

Those that are reported might contain embellishments. One fellow says he was using his vacuum cleaner to fill up an air mattress when his penis accidentally got caught in it, even though air mattress instructions clearly state that underpants should be worn during inflation and also the air should be going the other direction. “Blow” and “suck” are not always interchangeable verbs. But that’s the thing about men. They don’t read instructions. Also, the penis thing.

But that wouldn’t be the normal scenario. Air mattresses hadn’t even been invented by 1930 and yet penises were already getting caught in vacuum cleaners. It is generally assumed by trained medical professionals that some sort of self-gratification is involved.

Assuming the afflicted party is able to present his condition to a medical professional before perishing of shame, what can be done about a shredded penis? Well. Clearly this is a case for Radial Forearm Free Flap Phalloplasty. The forearm flap is, of course, a fasciocutaneous flap based on the fasciocutaneous perforators from the radial artery. Its use in this post is primarily alliterative; also, your correspondent has always found that any sentence can be improved a hundred percent by the addition of the word “flap.” Its use in penile reconstruction is different. A flap of skin is harvested from the patient’s own forearm (the “donor area”) with attendant vein and artery, and repurposed as a penis or penis part.

Complications include Donor Area Morbidity. In other words, there is a risk the patient’s own arm might be destroyed in the harvesting of the flap. And just like that, the patient is right back to the vacuum cleaner.