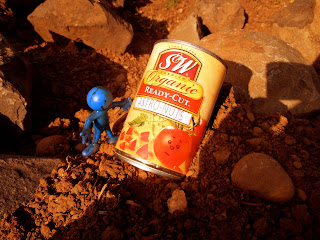 They’ve had six astronauts cooped up in a can since June of last year, and they’re not planning to let them out until November, after 520 days. That’s the amount of time it would take to get to Mars and back. It’s a test for future manned space flight, and it’s pretty clever, really. Most of us would have thought the sticking point would be the actual getting them to Mars, not to mention back again, but all of that rocket science would be for nothing if the astronauts started punching holes in each other’s suits or peeing in each other’s Tang twelve months in. You’ve got the potential for serious acrimony among the crew after a certain amount of forced occupation, and you’ve also got the possibility that any given individual would not be able to bear up. For all we know, even astronauts selected for their emotional sturdiness might do themselves in on a cellular level, their tiny cells slitting their tiny wrists out of sheer boredom,  and the astronauts themselves being reduced to a gummy mass of spilled mitochondria and despair. No one has actually performed such a longevity experiment before, outside of Guantanamo. You simply can’t know what will happen until you try, so they jammed the guys in and started counting down the days.

That’s just one thing they need to test for. There’s also the difficulty that is presented when humans are deprived  of gravity for prolonged periods. With nothing to push against, muscles dwindle out of pure apathy until the entire astronaut is no longer al dente, and becomes more of a custard when reintroduced to Earth. It would be a pity to spend all that time sending a guy to Mars and then just have to pour him out when he gets there and hope he jells up.

This experiment did not address that issue or attempt to remove gravity in any way. The men were simply cooped up and allowed to age in what is essentially a shipping container, described as similar to four Winnebagos with connecting tunnels. A year in, all seemed to be well enough, although the turn signal has been on since March.

The astronauts in the experiment were distributed as follows: three Russian, one French, one Italian, and one Chinese. The “marsonauts,” as they are called, did very well at first. Early conflicts were resolved when they were able to agree on a standard cuisine of goose liver and dog cacciatore with a cricket crust, the Russians reluctantly going along as long as the vodka didn’t run out.

I get it about the jamming people into a can for fifteen months to see how they do. Some people are probably better suited than others. Dave spends an astounding amount of time in the can and it doesn’t seem to bother him a bit.

But it’s not easy for any group of people to get along when they’re in forced company for any length of time. Humor is essential. Take the post office, a social experiment I was inserted into back in 1977. There I was in a room with dozens of other people (well, men), sorting mail day after day. The process of sorting your mail is called “getting your route up.” Pronounce it “root,” and ask your neighbor as often as possible if his root is up yet, and you have the makings of some serious comedy. But even this level of sustained hilarity isn’t going to tide a person over forever. In fact, there’s only so long you can take it. In my case, thirty-one years.

Sometime in September the emotional limit appeared to have been reached with the astronauts, two months shy of the time it would take to get them back to Earth from Mars. I’m not sure how they communicated their distress. I don’t know if they banged on the can or just came out shootin’. “Screw the pension,” they might have said. “I’m going out, and I’m taking some management ass with me.”