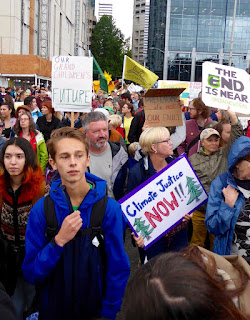 On June 19, 2019, a convoy of log trucks, big rigs, and tractors shrouded the State Capitol in a fug of diesel soot and blasted their air horns to protest proposed climate legislation. As a demonstration, it didn’t make the case for the status quo very well, but it wasn’t meant to; it was an unmistakable middle finger raised to those perceived to be threatening their livelihoods.

The loggers and truckers were supported by money from timber and trucking executives, but it would be a mistake to assume the demonstrators were paid actors. These are real people understandably concerned that their ways of life are threatened by the efforts to eliminate fossil fuels. They just want to survive. Which is what they have in common with climate warriors.

“We will no longer stay silent about politicians that try to legislate us out of a job,” Timber Unity PAC (TUPAC) wrote on its facebook page. 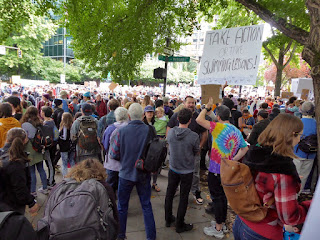 Politicians are an easy target, assumed always to be venal, even when they are duly representing those who elected them. And those constituents are assumed by many hard-working Americans to be fey baristas and hemp-wearing arugula farmers. But it is children who are in the vanguard of climate warfare, fighting for their future. For any future.

Any log trucker looking to mow down a few of these perceived enemies would have scored big at the climate rally in Portland last Friday. Thousands and thousands of young people showed up, but not one was interested in running people out of a job. Instead, they are trying to prevent extreme capitalism from running everyone, truckers included, out of a livable planet. It’s a matter of perspective. Working men and women often see the world through a lens as narrow as a wallet, but children are not so constrained. 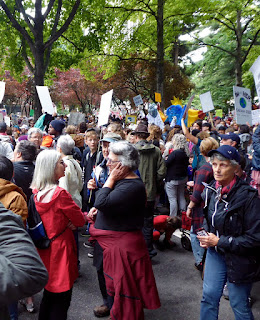 It’s always been easy to mock children for being foolish and idealistic, a term that usually stands in contrast to “realistic.” Realism is what is left when the clarity of youth gets sullied by circumstance. We grow inward as we age. But that doesn’t mean the idealists are wrong. Maybe it never did.

“They just want to get out of school,” people sneer. But every one of these marchers already knows more than those who belittle them. That is why they march for “climate justice.” And what is that? It is the recognition that those who have profited the most from the catastrophe we face will be affected the least. And those who have gained the least will be hit the hardest.

That is why every iteration of the Green New Deal insists not only on transitioning to clean energy, but strives to direct new economic opportunities to the poorest communities; and it includes elements such as fair living wages, and guaranteed health care and education for all, even if it scuffs up the purses of the wealthy.

The cohort of gray-haired hippies at the climate rally recognized the spark of youth and idealism and marched alongside in support and approval. It was easy to make fun of us back in the day too; the peace sign was the “footprint of the American chicken.” We protested a pointless and devastating war in part because its consequences were personal, true. We lamented the slaughter of innocent Asians in a way we might not have if we were not being lined up for sacrifice ourselves. And sure enough, as soon as the immediate threat was lifted, we swarmed Reagan’s new capitalist casino and scooped up all the money we could. But it doesn’t mean we were wrong to protest. We weren’t.

These children aren’t wrong either. And their idealistic souls will remain intact because there is no more fool’s gold left for them to plunder. They know the facts. The facts are that we are stripping our living planet of what is needed to sustain it, and yet our leaders are still doubling down on disaster. We must stop, or die. Hell yes, that’s going to shake things up.

There’s nothing simple about it, except the pure and absolute imperative for it. When your house is on fire, it’s not easy to jump out of the window, but you must to survive. People working for climate justice might give you a net to jump into. What you don’t do is try to put out the flames with gasoline.