We’ve all heard of a labor of love. This refers to any task so odious, so frustrating, so destructive of the temperament that no amount of money could ever induce you to do it. Only love could make you this miserable. Labors of love might include cutting a pattern out of silk. Or knitting (anything). Or, in my house, the annual production of the hazelnut-huckleberry pie. Pie-making in general needs a lot of love behind it, because some of it is going to be destroyed in the process, never to return, and you want there to be some affection left over. They’re all a pain. A blackberry pie is preceded by a loss of blood and some scarring. Apple pie always ends up looking like fruit sludge with an attic over it.

The particular treatment of huckleberries in this household comes down from the amazing Mary Ann, who whomps up her own recipes out of sheer exuberance and disdain for standard ingredients. Huckleberries are particularly dear due to their scarcity, and a plain crust does them less honor than a crust made with hazelnuts, which, in spite of what you may have guessed, is the State Nut. Mary Ann makes up things on the fly and uses anything available as long as it’s not sugar, in spite of which they taste just fine. 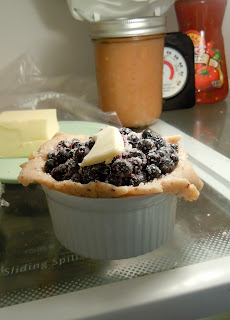 In many ways, she’s an artifact, an escapee from the nineteenth century who could have spanked a Conestoga expedition into shape. Once when a group of us went to our mountain cabin for a winter retreat and discovered it minus electricity, we all groaned and repaired to the nearest tavern for beer and pizza whilst waiting for the linemen to hook us back up. Not Mary Ann. She couldn’t have been tickleder at the prospect of Making Do. She resolutely stayed behind to see what she could spank up, and as we scritched the ice off the inside of the windows, we told her to have a cake ready when we came back.

We returned to a crackling fire, a respectable sixty-degree temperature, lit candles that were probably made on the spot out of boiled shrew hides, and the unmistakable smell of cake baking over the wood stove. There were no particular cake ingredients in the place, and the contents were a mystery, some without a doubt scraped up off the forest floor. But it was delicious. If she’d have found a bigger mammal, she’d probably have had a wheel of cheese started. 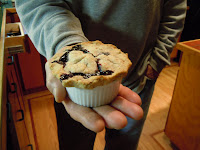 So one of the problems with huckleberries is the picking. It’s a pleasant-enough process, but you’re an hour into it before you’ve covered the bottom of the bucket. At minimum wage, a pie’s-worth of huckleberries should run you about forty bucks. Every year we go up on the mountain to scavenge our berries and in a very good year we might get enough for five pies. This was not a good year. Mary Ann and I picked for an hour and together we didn’t get much more than pancake spangles.  I told Dave the sad news and he promptly donned the stricken look I last saw on him when we found out Roots Brewery was closing down.

When you really love someone, and he really loves hazelnut huckleberry pie, you’ll do anything to remove that stricken look, and there’s only one thing that will work. Pie crusts are crazy-making. They shouldn’t even be attempted for all but about five days out of the month during a woman’s reproductive years. A nut crust ups the ante. The crusts are rolled between sheets of wax paper to keep the tears of rage off the dough, and with great care and a hip-hop vocabulary, they can sometimes be transferred to a pie plate in one or two shreddy pieces. They will not be transferred to the state fair.

With a quick glance at our berry haul, during which I was able to get an accurate count of individual berries, I selected a two-inch ramekin from the cupboard and had at it. A single hazelnut huckleberry pie out of my kitchen would run you about a hundred forty bucks, including time in and the exasperation tariff. A two-inch pie? Priceless.

Although somebody’s going to pay.

Mary Ann does everything for love, but if you want to take a look at what she does for money, take a stroll around A Cast Of Characters. There is no better source on this planet for genuine bronze Otterhound door knockers, among many, many other things. And yes, I do have salamander cabinet pulls.