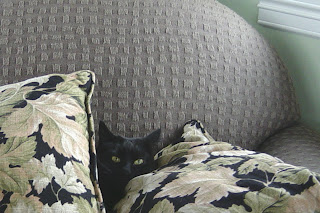 I may be the slowest scooper on the parade route, but I would really like to think that if there was a strange cat holed up inside my sofa, I’d be able to figure it out. I’d like to think that if my sofa were mewing, and if I had just purchased the sofa used, and if the mewing began on the day I brought the sofa home, I’d be able to connect some dots. If I were not able to put it all together, I doubt that my first reaction, upon sitting down on the sofa and feeling something move beneath me, would be to pick up the sofa and look. Not unless I could do it from up on the ceiling fan.

A Miss Vickie Mendenhall, of Spokane, however, had lived with a yowling davenport for quite a few days before her boyfriend discovered the cat by sitting on it. Perhaps they were distracted. Perhaps the TV was too loud. “It sounds like there’s a zebra in the garage,” Miss Mendenhall might say. “That Simon Cowell is a tool,” the boyfriend would respond, and that would be all there was to that, until someone had to back out the Cherokee.

In reality, though, I might not have been any quicker on the uptake. A lot of times when I hear something, it’s just safer all around to assume that no one else can hear it. Recently I began to notice that there was a mild little eep! sound every so often when I was sitting at the computer. Dave heard it too, although even we don’t consider that a lock on reality. It seemed quite random and was so quiet, like a distant mouse at a surprise party, that we were never able to triangulate it. Out of nowhere would come another eep! and we’d both point to each other, unable to agree on a source. I eventually discovered that it came hourly, at nineteen minutes after. Then I heard it while I was in a whole other room. I suspected my watch itself, and quarantined it upstairs, to no avail. Eep! No matter where we were, at nineteen after the hour we heard a little eep! coming from somewhere nearby.

When it eeped shortly before people were coming for dinner, I got the brilliant idea of setting an alarm for 59 minutes and enlisting the whole crew to listen up. I forgot to tell them about it, though, and when the buzzer sounded, I suddenly jumped up and screamed at everybody. “Mikey! Stand by the basement door! Susan! Over here by the oven! Andrea! Next to the computer! Go, go, go! Be very quiet and listen!” They all ran to their places, one wondering if he should pick up a weapon, one wondering if she should summon a medical professional. And we found it. Everyone was pointing in the same direction, like it was the grassy knoll. The oven was eeping. We have no idea why.

It’s just another little reminder of the passage of time, and puts me in mind a bit of those moments of existential dread you sometimes get in the middle of the night. Those were a lot scarier when I was younger; it would feel like a pellet of ice hitting my heart, when suddenly, out of nowhere, I would recognize my own death as an actual event in my own actual future. It was terrifying. Those moments have come up periodically throughout my life (eep!) but over the years I’ve paid less attention to them. Oh crap, I’m going to die, alert the press; boo hoo; now, don’t forget to throw some compost on the strawberry patch. I’m not liable to do anything about the oven, either.