Lipstick In A Caulking Gun

I’ve heard it said that painting an old house is like putting lipstick on a pig, but it’s not true. Pigs don’t need lipstick.

Not our house. That’s a job. The last time we thought it needed paint, it had metastasized into this giant thing (actual quote heard while under construction: “Is that going to be a Montgomery Wards?”), and it was daunting. Following a suggestion from a friend who said we could probably accomplish the same result with money, we hired mercenaries. People who could dangle from a dirigible to get the top bits of the tower. People who didn’t have an active acquaintance with their own mortality. People who, hell, didn’t lose consciousness every time they cranked their neck up to climb a ladder. Young people. 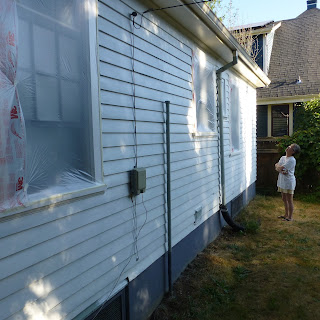 But this house, our rental house, is only a one-story. You just scrape off all the paint that wants to come off, you prime, you caulk, you paint. And if there’s one useful thing I know how to do, it’s prep and paint. In fact, that is the one useful thing I know how to do. I learned from the best. Actually, I learned from Dave, but he’s my best. He taught me how to decant a portion of the paint into a bucket and do the whackety-whackety with the brush to offload the excess; he taught me how to dry off a newly washed brush by slapping it repeatedly against my butt. In fact, I think that was his own idea. I am mindful of the drips. I feather. I mitre the corners of the window-frames with my paintbrush strokes. I’m careful. None of which really comes in handy with the rental house.

Its south side is a complete mess, but the same could be said of a lot of us. With this place, you could be scraping merrily away when a chunk of petrified paint and caulk comes flying off, followed by a bluster of attic bats. After a while you don’t even want to be doing that good a job. You’re afraid the structural integrity of the place owes a lot to modern latex paint and cobwebs. You’re afraid of cutting loose a strip of fossilized goo and seeing all the clapboards slide off. There are boards up in the attic area that are relying on rodent carcasses to remain wedged together. First thing we did was get rid of some wasp nests but we probably lost some valuable biological adhesive there, too. 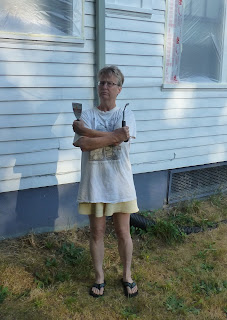 I’m afraid we’re bothering the tenants, of course. Scraping is nasty, loud work. It can set your teeth on edge. But on the other hand, who really “works” from home? As if. Pssh. Young people. It’s not a job unless you punch a clock and your boss is an idiot. And the rest of the neighbors probably got used to the rumbling of the truck that came to cannon in the fresh caulk.

Even though it’s a little house, it’s a lot of work. But I can’t see not painting it myself. I’m just not that person.

I will be in another week.