Lord, Lord, Wasn’t That A Fish? 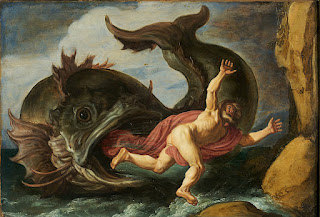 My earlier musings about whether a whale fart could contain a horse led me, at one point, to imagine that this was being proposed as a humane marine transportation device for land-dwelling mammals, and although these sorts of things are generally tried with mice or guinea pigs first, perhaps somebody was going for glory. And the prospect is worth investigating, after that Jonah debacle.

Which led me to study Jonah. Jonah is a great Bible book: it’s only two pages long. I’m not a hundred percent certain what it’s about. Jonah is suicidal from start to finish. First God tells him to pop over to Nineveh and preach to the citizens that they must mend their ways and repent or the city would be destroyed. Jonah says he’d rather die. Instead he tries to go somewhere God can’t find him–he’s a little unclear on the concept, there–and tries to take a ship to Tarshish.

To this day no one knows where Tarshish was and it is possible “going to Tarshish” is one of those phrases like “buying the farm,” and refers merely to a place that is very very far away, possibly just outside Bumfuck, Egypt.

Anyway he never gets there. There’s a terrible storm and Jonah admits to the ship’s crew that it was probably his fault and offers to be cast into the sea, that evidently being a better fate than having to preach in Nineveh. The sailors don’t want to do it but things were taking a turn and eventually they beseech the Lord to let them throw Jonah overboard but not get into trouble for it, and so it was done. The seas calmed instantly and the grateful sailors made a sacrifice unto the Lord. Sacrificing Jonah didn’t count because they hardly knew him.

God locates a nearby biddable whale and offers him Jonah, because God loves whales. Everybody loves whales! Jonah was in the belly of the fish three days and nights. This is probably using the omniscient point of view, because it would be hard, one thinks, for Jonah himself to know just how long he was in there, unless one imagines, as I do, that in the daytime the belly is sort of semi-dark yet pinkish, with a floor and throw pillows. Anyway Jonah had a chance to think about things and decided he had been unfaithful to the Lord and that’s what got him into this situation.

God noted Jonah’s remorse and directed the whale to ralph him up onto dry land despite the dangers to the whale of the shallows, because maybe God, being mysterious, doesn’t love whales after all. Giveth, taketh away, it’s the old story.

Unfortunately for Jonah, this reprieve meant he couldn’t skate on the Nineveh deal, so he hied off to Nineveh, and told everyone to repent or die, and somehow they not only didn’t kill him, but everyone from the King on down put on sackcloth and ashes. Sackcloth is itchy and made of goat hair and it’s worse than Carhartts.

So the Lord spared Nineveh. Which ticked off Jonah. Not sure why. Maybe he felt cheated out of a good urban cleansing that he’d predicted, after all, and if it didn’t happen, who’s to say it ever would have happened? And here all these people are sitting around in hair shirts and ashes and they’ve got to be wondering the same thing. Jonah wanted to die.

Anyway Jonah went off to pout and see if the city blew up after all, and then God put a gourd out there that grew up in a day and shaded him, which was nice, and then he sent a worm to kill the vine the very next day, and I’m not sure why it matters because Jonah had already built himself a booth for shade, but that all pissed him off too.

And God said you didn’t have anything to do with that vine, and why shouldn’t I care about Nineveh, that has 120,000 people that don’t know their right hand from their left, and also has cows? That is what God said, and I believe it, because you can’t make this stuff up.

Still, it doesn’t make much sense, and the whale clearly got the bad end of the bargain. How much nicer it would have been all around if Jonah had been permitted to make it all the way through the whale and shoot out on a fart! He could bob around in the ocean all warm and eventually make it to the surface, and the poor whale can go about his business.