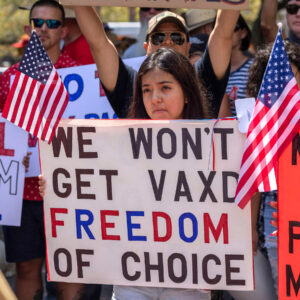 According to the latest polls, large numbers of Americans believe in lizard people and evil scientists and hoax viruses and that Joe Biden stole the election and is also weak and sleepy. I wouldn’t trust a lot of us to have the scoop on whether or not it’s raining out, but I guess this is what passes for news.

One year in, Biden is widely seen as a failure.

True, he did ram through a 1.2-trillion dollar infrastructure package, a 1.9-trillion dollar coronavirus relief package, appointed a buttload of federal judges, over 80% of whom are women and over half non-white, rejoined the International Paris climate accord, halted government financing of fossil-fuel projects worldwide, brought jobless claims to their lowest level in fifty years, froze oil and gas leasing on public lands, rolled back many of his predecessor’s assaults on the environment as soon as he got into office, and facilitated the full vaccination of 209 million people against COVID.

However, he has failed to make the pandemic go away, having been unprepared for the newer variants of the virus and recklessly optimistic about the intelligence of the citizenry. Also, things got messy in Afghanistan, a country in which a war was waged against the Taliban for twenty years and nevertheless fell to the Taliban the day after we bugged out, by any measure a war we lost badly, which has not prevented critics from suggesting we should have stayed put for maybe ever.

Similarly, for someone lauded for experience, he appears to have no influence at all over federal judges and the Supreme Court. In short, he over-promised and under-delivered, and that’s on him. Perhaps because of his embarrassingly advanced age, he failed to imagine the degree to which Kyrsten Sinema and Joe Manchin would be motivated to maintain the longest-lasting woodies in modern American politics—in Manchin’s case, a gauzy, reconstructed memory of woodies of old, and in Synema’s, without question, an actual working present-day power woodie she has no plans to abandon.

And he’s been a complete failure with Republicans. White House sources reveal the President also approached Theodore Roosevelt to step out of Mt. Rushmore for a nice evening of conversation and light snacks, and got absolutely nowhere. The man simply has no idea how to reach across the aisle.

Inflation is back too, all over the world, and fueled mostly by the pandemic, which, again, continues to rage on Biden’s watch, because he has not been a forceful enough leader to make it go away, instead relying on the common sense of Americans and readily-available free vaccinations just like the Nazis would have done, and now the damn thing is out of control. If Biden were not so weak and sleepy this whole thing would have been revealed as a hoax long ago and we could all smear bodily fluids on each other in public and wipe ourselves off on the flag.

The Socialist bastard also wrecked the economy with his relief stimulus checks. “Socialism” is the virtual graffiti sprayed on any effort to better the lives of most people and it clearly causes high gas prices, plague, vaccine mandates, vaccine shortages, and uppity Negroes—just have a look around.

Yes, if Joe Biden has not gotten far with his agenda, it is all on him, and certainly not the Technicolor senator with the big woodie or the other senator with the yacht and the fossil woodie, or, for that matter, all the Republicans, who stand with their arms locked together and blame him for lack of bipartisanship. Yes, he is a failure, a weak leader who does not know how to get anything done in the face of solid obstruction, and so nothing is getting done.

Which makes Republicans by contrast strong and successful, because Nothing is precisely what they have proposed for years now, and they have delivered. They are furthermore successful in positioning themselves as friends of the little people by agreeing they’ve gotten screwed, and by providing them large groups of fictional people to blame, such as racist BLM activists, lazy immigrants, terrorist Muslims, and coastal elites who hate freedom. This, and a program of mucking with elections, should ensure several more years of minority power with nothing more to show for it than the continued theft of the nation’s wealth, with ever more poverty to showcase and blame on creeping Socialism. Winning!

Meanwhile, Biden must simultaneously be a cheerleader and tell America the truth, but lacks the serpent’s tongue. Big fool thought he could tame the COVID beast with science and government aid and utterly failed to anticipate the omicron variant and the willful derangement of much of America.

The entire Republican Party, meanwhile, fails to anticipate mass extinction and the end of a habitable planet and (incidentally) the complete collapse of their beloved pirate economy, but with enough money siphoned from the middle class, they and their shitty kids will be fine for a while.