The next day I call again, hoping to score a different nurse, and I succeed. This just doesn’t sound right. And it turns out it isn’t right. There had been a miscommunication. The doctor tacks on a third week of treatment. I start again.

Given enough time, the magic cream will happily remove your whole face, but, in theory, it seeks out the faster-growing cells that are improperly motivated and burns them off first.  So a person applying said cream can expect portions of her skin to light up like the Milky Way. In my case, a number of areas of my face that I thought could be trusted to play quietly by themselves were actually up to no good. The magic cream lit up a stealth army of skin cells that had apparently been scheming to take me down all along. I am the captain of this here ship, and now I see there has been talk of mutiny. I intend to see to some plank-walkin’. I continue to apply the cream.

My chin has turned a blotchy plummy purple. To be fair, I have seen baby’s bottoms that looked similar. My chin is not my favorite body part. It’s been sinking into my doughy neck like a bon-bon on a pillow for years. As we know, the skin is the largest organ in the body, and I don’t like to brag, but my neck is hung like a racehorse. I don’t approve of this, but I had always thought that at least my chin looked comfy. Now I can see  it was just settling in to plot my downfall. I do remember the inciting incident. It was 1980. I was climbing Mt. Hood. People didn’t do much sunscreen then, but our guide talked us into some zinc oxide, which I applied in an attractive smear across my cheeks and button nose. Worked good. The sun, however, was zinging off the snow and onto my lower face for hours. The next day I had blisters the size of voles hanging off my face. I got future-cancer in one day. 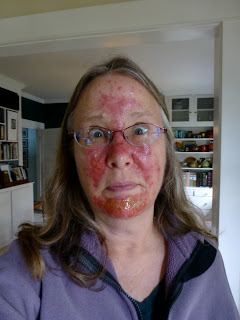 Week three is not too bad at first. Friends say nothing, but speculate privately about my diet. A few days later, passersby remain friendly and give Dave a nod of appreciation, assuming he is an evolved man who is drawn to inner beauty. On Day 24, they give him the raised eyebrow of suspicion. By Day 25, people snug their children to their sides and cross the street as I approach. The grocery clerk sprays antiseptic on his conveyor belt after I pay. A driver rolls down her window and lobs me a quarter. My face looks like a baby baboon’s bottom. I decide to stay indoors out of consideration for others.

In the shower, my face shears off like a calf from a glacier and sludges up the drain.

At the end of the third week I call the nurse again. I feel worse. But I’m really not as miserable as I’m supposed to be. Should I keep going?

“Do you have any oozing?” 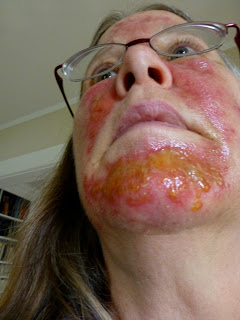 “Okay, that’s probably a staph infection. Maybe you should see the doctor.” And miracle of miracles, although appointments with my doctor are always two months out, she makes a slot available to me. I meet him between the ninth hole and the clubhouse.

The doctor said I can quit now. I walked away, a festering pus-bag with a bottle of antibiotics and a date in five months “to see how we did.” I stopped well short of suicide, but murder is still on the table.