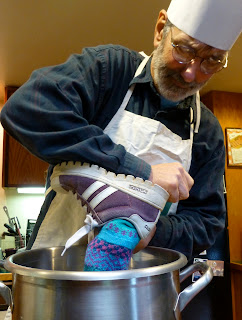 A California chef has been tried for murder after accidentally killing and boiling his wife. The case had been simmering for a while. Jurors were not persuaded on numerous fronts. It was difficult to make the case that the man had accidentally boiled his wife, inasmuch as he confessed to sticking her in a fifty-five gallon drum head first, keeping her submerged with weights, and slow-cooking her for four days. This, the jury felt strongly, had intention written all over it, even though–as the defense pointed out–the accused was a professional chef and yet failed to add the celery and carrots at any point. By chance or no, once he discovered he had boiled his wife in a vat, he disposed of most of the remains, by now quite flavorful, in the grease pit at his restaurant. Only the skull was left, and that, he says, he stored in the attic at his mother’s house. This had the ring of truth, because the attic is where you store everything you don’t really want anymore but can’t bring yourself to throw away. Police dispatched to the location were unable to find the skull, but no one ever finds anything they’re actually looking for in an attic. If they had gone up there to look for the Christmas ornaments, they might easily have stumbled across the skull. However, to date, no portions of the body are in evidence or, to put it another way, there are no leftovers.

Boiling a corpse is not unprecedented. In 1796, fierce General “Mad Anthony” Wayne sat down and died in a chair of gout. (The local museum still has the Chair Of Gout.) He was buried under the blockhouse and remained there for 13 years before his son arrived to unearth his remains and take them to the family plot in Pennsylvania.  To everyone’s surprise, most of him was still in nearly mint condition, preserved by the cold, when he was dug up. The son, who had been counting on a clean set of bones, had him stripped, dismembered, and boiled, and the meat was discarded. Nobody trusts gouty meat. 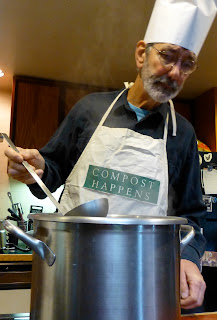 It is only natural for someone aiming to dispose of incriminating remains to fall back on the knowledge of his own experience–in the case of the California chef, cooking. Rare is the mailman, for instance, who has not given at least some thought to how to hide a body. Practices change over time. In my early days as a letter carrier, we would probably have gone with the old standby, misdelivering the corpse to a vacant house. Everybody does something like that sooner or later. Or, bodies can simply be stacked in the mailman’s own garage with the rest of the mail. Modern carriers need only slap a garbled barcode on the remains and slip them in the mail stream, where they will loop endlessly around the country being stamped “undeliverable” until they fall apart. 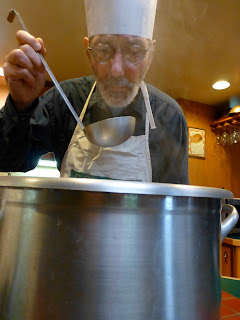 The jury also had trouble believing that the murder itself was not deliberate, although here the defense was stronger. The accused admitted he had duct-taped his wife and then fallen asleep, and to his dismay she was dead by the time he woke up. Tellingly, he gave several different versions of why he duct-taped his wife, including to keep her from getting into her car while she was drunk and high on cocaine–a public service, if you will–and to get her to quit talking so he could get some sleep. The latter version is the more plausible. Anyone who drops dead when prevented from speaking is probably a pretty noisy individual.

He got away with his crime for two years, but panicked when it appeared that the police were closing in on him. He threw himself off an 80-foot cliff but succeeded only in tenderizing himself. But he was wise to try to avoid apprehension.

They were going to grill him.