As a frequent visitor from Oregon, I have a few observations about you. They are meant affectionately, of course. When you come from a state where everyone wears socks with their sandals and nobody owns an umbrella, you do not take potshots. 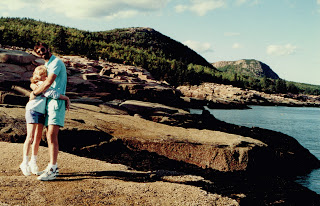 Maine is not a large state by western U.S. standards, but if you start at the bottom and work your way up on the coastline, you will have gone north and south enough times to develop your own polarity. The underlying granite is corrugated and pleated and it trails its fringe into the sea like a hippie mama. As a consequence, most people in Maine seem to live somewhere on the water, and with a substantial acreage, too. It’s cheap. No one has much money and they get by selling each other antiques, plowing each other’s driveways, repairing each other’s plumbing, slapping on each other’s additions and installing each other’s generators. They’ve got a homemade sign up in their yards with their specialty and phone number, and the economy lumbers along at a perfectly adequate clip. By contrast, our economy in Oregon is based entirely on selling each other coffee drinks. We too are poor, but alert. 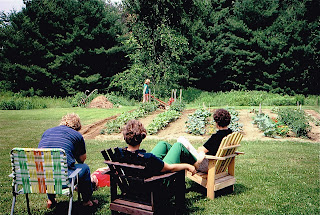 The magnificent granite also rears up inland, surfacing like whales. It’s not unusual to see a whole pod of granite slabs cresting the soil right in the middle of the woods. And it’s easy to see things in the woods. Out here we let our forests get quite unruly, but people in Maine like to tidy theirs. They keep a hacksaw handy-by, clip out any unsightly saplings and chip up the debris, leaving a neat duff floor and a view to the nearby water. 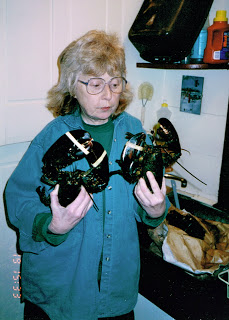 The houses have a big patch of these tidy woods in the rear, a vegetable garden out back, and a massive lawn bounding across the property and hooking up with the neighbors’. It is possible to ride a mower for several hundred miles most places, and right to the bottle redemption center everywhere. People come home from work and hop on their mowers, pushing the speed lever up to the max to outrun the black flies, and then they’ve just got time to boil up some lobsters and go to bed. That’s only in the spring, of course. Later they’re outrunning the mosquitoes. There’s a day or two between black fly season and mosquito season, and folks get on their phones to tell each other just when that is. “They took off yesterday here in Winthrop,” they’ll say. “They should be clearing out of Waterville real soon.” It’s party time.

Everybody in Maine knows how to take a lobster apart, and they eat the green stuff, too. No one is squeamish about dropping them in the boiling pot, either. I tend to cringe a little every time I see it, but I don’t have to slice my pork chops off a live pig. They drop their lobsters right into the steam, and then every one of them will maintain that the lobster doesn’t feel it. There’s no logic in this. They say this for the same reason people insist dogs mustn’t eat chocolate. More lobster for me; more chocolate for me. 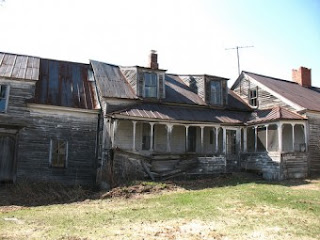 But my favorite thing about Maine is the architecture. That’s a big word to apply to the houses that lope over the landscape, and implies a degree of deliberate design that isn’t actually in evidence. What really happens is someone back in the 1800s builds himself a house. He builds himself an outbuilding down the way. In the intervening years he accumulates children and odd building materials, and every time he gets a dab of money together he scabs on a new room. The new room gets put on wherever there’s the least granite. After a hundred years or so, the house is lurching across the yard and threatening to stagger into the outbuilding. Winters are harsh. At some point, it just makes sense to hitch the house up to the outbuilding, poke in the last interior door and grab the hacksaw without even going inside. And bingo, there’s your architecture.

There’s nothing about this arrangement that makes sense, from the standpoint of artistic composition. It’s not what you’d get if you sat down and designed a house that size. But somehow it speaks to me. It reminds me of my own interior landscape. I start with a modest idea, lose track, struggle for nouns, forget where I’m going, hook one random thought to the next, and before you know it, I’ve made an essay.