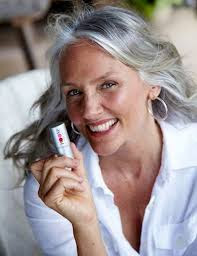 I kept seeing this ad for some beauty line with the caption “Ten makeup tips for women over fifty.” I guess the internet has nailed my demographic, if not my style, which is best described as “not applicable.” If I were giving the tip, it would be “Just march on out there with what God gave you and give it a go,” but that didn’t even make the top ten. The person providing the tips is a stunning 64-year-old woman who needs makeup like a jellyfish needs stretch pants. When she dies people are going to want to dig her up for one last look. Nevertheless, it’s makeup she’s selling. I don’t know how much of her product you’d need to buy to look like her, but I do know you’d also need joint compound, a sander, and Leonardo da Vinci in your contacts list.

To her credit, though, she thinks you don’t need much makeup. At your age, Petunia, less is more. Which is great, because you can’t get any more less than I have. “Don’t overdo it,” she cautions. “After age fifty, your face is not a blank slate anymore.” Boy howdy and ain’t it the truth! Nothing blank about it. It’s got some wear to it. She says she let herself go gray at age 45. I haven’t worn makeup since I was sixteen, so that’s about when I started letting myself go gray, also. It took another thirty years.

Anyway, she warns against using any kind of powdered foundation because, as she delicately puts it, you don’t want “unwanted extra texture.” The implication is that at this point you’ve started to accumulate some personal texture of your own that you might not want to draw attention to. Sweet baby Moses in a sunhat, I’ll say! It’s a freakin’ moonscape, innit? I’ve got stuff growing out of my face that was never on the original work order, but there it is. I’m counting on most of it not being cancerous.

So you sure don’t want to use any kind of powder. That just settles in drifts in your personal arroyos whilst tiny tumbleweeds of talc drift about and collect in the beard zone. What she’d like you to use instead is something more like lipstick, but for all over. “Is there a woman who hasn’t dabbed a little lipstick on her cheeks for a quick touch-up?” Why, yes, there is. There’s at least one who never dabbed any on her lips, either. One time when I was too young to have money to buy makeup and was most certainly not going to get any past the parents anyway, I put a little baby powder on my lips, because we were going through that fashion nanosecond when white lips were cool. It tasted weird and I gave it up. I couldn’t afford the go-go boots either.

Oh wait–I also tried someone’s red lipstick on a dare, just that one time, and wiped it off in nearly the same instant. I was going for an Ingrid Bergman look but the effect was more like a stab wound.

Still, the concept here is that you get a few items for your Kit–you get to have a Kit!–that come in big wide tubes and you goo it on yourself. Kind of all over. You’re not supposed to put on MUCH makeup in any one spot, but there’s no limit to the territory you can cover. The champagne-colored one, for instance, is meant to go in the inner corner of your eyes, your cheekbones, your shoulders, and your decollete. I know what that is. That would be your boobular region, and I’m not up for chasing that around with a stick of goo. It would be one thing if we still wore those 18th-century gowns that mash everything up above the bodice where you can reach it. 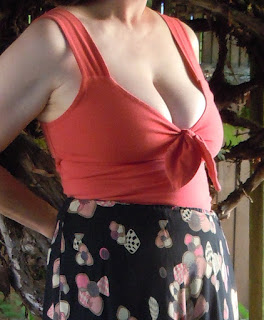 I have a different plan for my decollete. That fine-sand beach got covered with riprap decades ago, and I plan to keep it covered the hell up.

There’s more. Eyeshadow: it should be a shade lighter than your skin tone. But our friend has an even more daring proposition. “If you can,” says she, “even try going eyeshadow-free!” Way ahead of you, babycakes.

Most of me is under my eyes.