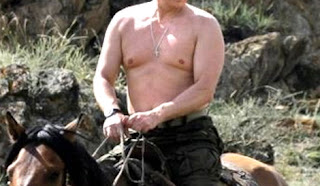 [Two players enter world stage and circle each other warily, one standing and dribbling a globe, the other with a horse between his legs, his broad chest gleaming with manly manliness.]

“Ho, there, little man on foot. Mind the hooves. It would be a pity if you were to accidentally get squashed like a bug.”

“As if. I am far too quick for that. I can dunk over you any time I want, with my vaunted quickness. You and the horse you rode in on.”

“Only a fool thinks of himself as exceptional.”

[The horseman strikes a pose, and suddenly the globe sails over his head, while he swats at it wildly. The first man has darted quickly around the horse and caught the globe on the other side. He resumes dribbling.]

“Your pet state made a stinky.”

“Not my pet state.” The man on the horse notices a small roll of flesh over his trousers and makes a small twisting adjustment in his torso to eliminate it. “My pet state was in the yard the whole time.” 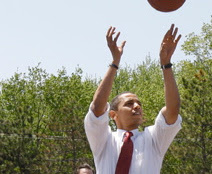 [Dribbling.] “I think I’ll drop a missile on your pet state for making a stinky.”

“My pet state didn’t have anything to make a stinky with. Nevertheless, because I am the bigger man, as you can see by my horse and chest of manliness, I will tell it to give up the stuff it could have made a stinky with, if it had any, which it doesn’t.”

[The globe bounces: one, two, three times, and then comes to rest under the man’s outstretched palm.]

“Ha ha, made you stop. I lured you in with my huge, throbbing diplomacy. I threw out my bait, and you snapped at it. I am the King of Baiting. I am the Master. Say it.”

“No you didn’t. You folded. You folded because you are afraid of my big missile.”

“Are too,” the man said, giving the mounted man a little poke in the belly.

“That’s it. Deal’s off until you admit that you fell in my trap. And I’m gonna tell the United Nations you poked me. Say you’re sorry.”

[Voice of the United Nations off-world-stage] You kids quit running with scissors and keep it down out there. I’m trying to watch my show.

chest. The rider’s man-nipples flare erect and cast shadows across his midsection.]

[Voice of the United Nations off-world-stage] That’s it, you kids are driving me nuts. Wait till your father gets home.


[The globe bounces once and is still. The horse drops his head. Both men squint, puzzled. The horseman speaks first.]

[Horse tosses mane and flounces off, man-nipples pointing the way.]