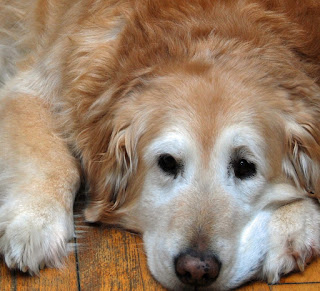 I’m on vacation. While I’m gone, I’ve put in some excerpts from a book of postal stories I wrote four years ago, just for fun. The story of Marbles begins here.

Whether or not a route had direction cards was a matter of the route’s regular carrier. They could be useful, confusing, illegible, or non-existent, depending on the carrier’s artistic sensibilities, clarity, or tendency to care. This batch was one of the good ones. My progress delivering the route was slow, but it never stopped altogether, and whenever I hesitated, a direction card would appear with arrows and boxes representing houses and all would become clear. At one point I had come up to a dead-end, having delivered all the houses in sight, but still hadn’t run out of letters, so I glanced down at the explanatory card.

Across the street was a grassy hill with a worn path, and I went that direction until a short stone wall came into view, and then I hesitated. There was a large, peculiar-looking yellow dog sitting by the wall, regarding me with his tongue lolling. “Marbles?” I said, and whap whap whap went the yellow dog’s tail. He took off at a human pace through the woods, beside a hedge, and over an embankment, culminating in a driveway to a house. He trotted up to the mailbox and sat down solidly in self-satisfaction. The house numbers matched the address on my next letter. This might have been the finest dog I had ever met, and I told him so, whacking him affectionately on his side. He stood up once again, to make himself easier to praise, and that’s when I took a good look at him.

There was something hanging off the dog, something underneath, something I fervently hoped was a temporary accoutrement, a little something picked up in a romp through the woods, but no. I took in just as much of the dog as I wanted to and then directed my attention elsewhere. The dog did not so much defy description as defy observation. I didn’t want to look. Marbles turned around and headed amiably off, trot-bobble, trot-bobble, to a place in the sun, and plonked down in a contented heap. He had a job, he had his independence, and I swear I don’t know what-all else he had.

The rest of my section looked pretty straightforward and I went on my way, pleased and a little unnerved by my introduction to Marbles. The direction cards were invaluable and the rest of the route went slowly but uneventfully, until I got to a Mrs. Jackov’s house. I was just dropping mail through her slot when the door flew open. Mrs. Jackov glared at me like the living bane of Oz. “You’re late,” she hissed, unnecessarily. I began to apologize in a general sort of way, without the desired effect. In fact, she had a couple letters to go in her hand and she began to swat me on the head with them. “I can’t just leave my letters hanging out of the slot all [swat] day [swat] long [swat], waiting for you, they’ll get wet! Or stolen!” I promised, based on a habitual and unfounded optimism, to do better the next day.

Wally Collins called in sick the next day too, so I did have a chance to redeem myself with Mrs. Jackov. Things went a little smoother, and Marbles was once again at his post next to the little stone wall. We greeted each other like old friends, and I patted him carefully on top of his head. Once again he led the way, trot-bobble, trot-bobble, and when we emerged at the driveway, we startled the meter reader. “Is that your dog?” he asked, and I explained the dog and his evident function in life. “This here is Marbles,” I said, introducing the two. “Marbles, Meter Reader.” Marbles put out a nose, accepted a pat, and began to trot away.

“There’s something hanging off that dog,” the meter reader said. “Looks that way,” I said, looking a different way. He observed the dog for a scant moment and then abruptly launched into a torrent of idle chatter. The meter reader and I developed an equally fervent and precipitous interest in anything not related to the dog. We were still gabbling away when a Sears delivery truck pulled up. The driver got out, with a friendly wave in our direction, and went towards the back of his truck. Marbles got up to investigate the new possibility for attention, and the driver provided some, pronouncing him a good boy. Re-validated, Marbles trotted back to his sun spot. The Sears man stared after him.

“What is that hanging off that dog?” he wanted to know.

“We don’t know,” the meter reader and I said in unison, and steered the conversation hard in another direction. Meanwhile, the other fellow failed to pick up on our diversion tactics and continued to stare at the dog. “Holy cow,” he said, crouching down.