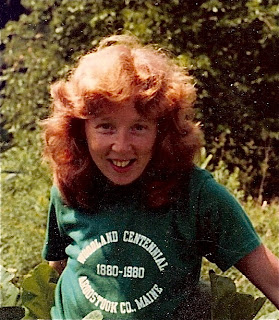 It’s been obvious for some time that there would have to be a special holiday in Margaret’s honor, and I don’t say this just because I was lucky enough to be her sister. Everyone who knew her feels the same way. She was the fire we warmed ourselves at. She was all trumpet-toots and confetti, an entire marching band in size-five sneakers. She was a bright red Skittle in the sofa cushions, she was a parrot crashing a crow convention. Rrraawwwwk! That was her shriek of delight. Delight at the world, delight at life, delight in your very company. Margaret’s was the primal shriek of joy, and lordy, could she let it rip. 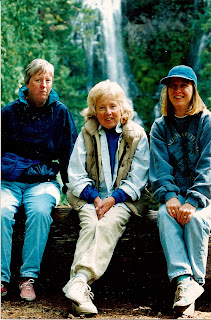 It’s easy to love someone who thinks you’re a better person than you really are, especially if she allows you to grow into her opinion. “This changed my life,” she’d pronounce, all gratitude and exuberance, and she could have been referring to a new support pillow, a jar-opener, a portable carrier for her oxygen tank. Oh, we lined up ten deep to help change her life, we did. She didn’t run out of friends, she ran out of air. The world has had a creak in its spin ever since. If friends could keep someone alive, she’d be here now. Since she’s not, there has to be a Margaret Day. That much is clear: but what form should it take?

Maybe it wasn’t a coincidence that after my sister eased off the planet, we had solar panels installed. Something needs to be able to take energy out of thin air and bring it inside, and if we can’t have Margaret, we have to make do. It’s a poor substitute, but there are similarities. Both work better in the sunlight. Both are hot. Both make me deeply ashamed of my underwear. 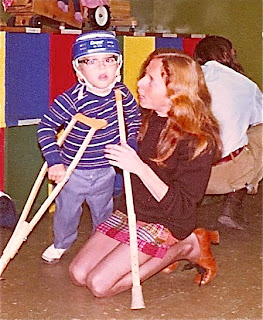 The solar panels are indirect about it. They come with a read-out on the computer showing our hourly energy production, in smug green, vs. our consumption, in accusatory red. The red line rolls in hills and valleys until we turn on the clothes dryer, and that produces a scarlet spike sharp enough to impale the toolbar. It was no longer possible to ignore the energy waste, and we started hanging our clothes on a line, including my underwear, the condition of which used to be known only to me and God, but now also our neighbors and anyone walking down the alley.

“Rrraawwwk! What is this?” my sister once said, scandalized, plucking something out of the dryer that had started out life as a pair of panties. I had nothing to say in my defense. The frayed cotton hung in tatters from a few anchor points on the elastic. Worse, all of my panties were in the same seedy state.

“This is outrageous,” she said, riffling through my laundry. “What does this say about you as a person?” 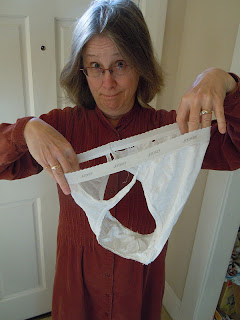 Looking in my underwear drawer, it is impossible to imagine what it would take to send a pair of my panties to the dumpster.  When we had a puppy, she would find my underwear in the hamper, which is what we called the area on the floor next to the bed, and carefully chew out the entire business section. I wouldn’t notice until I cleaned them and pulled them on again and a little breeze would inform me that the only part missing was the part that mattered most, and even then I hesitated throwing them away, if the elastic still looked okay. I’m not proud of this. 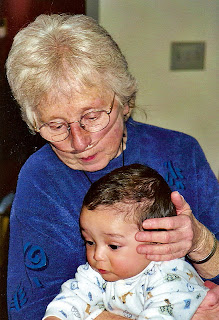 A while ago, probably when I was supposed to be doing my taxes, I got a notion to turn the panty and sock drawers upside down and do a thorough purge. The socks weren’t any better. Even after the ones with holes in the heels are eliminated, we’re hard pressed to get any two alike to pair up; they seem to have gotten their instructions from some obscure chapter in Leviticus. Margaret once told me that our niece’s underwear was equally disreputable, and yet that niece feels comfortable informing me that I need to update my style. “Yours are granny panties,” she says, which just goes to show. They are not. They are French Cut, entirely different. If you want to see granny panties, you should have seen my own mother’s, of voluminous silk with cuffs in place of leg elastic. We used to rig them up over the picnic table on hot days for the shade. Granny panties, my adequately-covered ass.

I invited Dave to join the purge party. “We can do this once a year, in honor of Margaret,” I said. “Great,” he said. “In fact, we should do that on her birthday.” Genius! That gave me eight more months to say goodbye to my underwear. 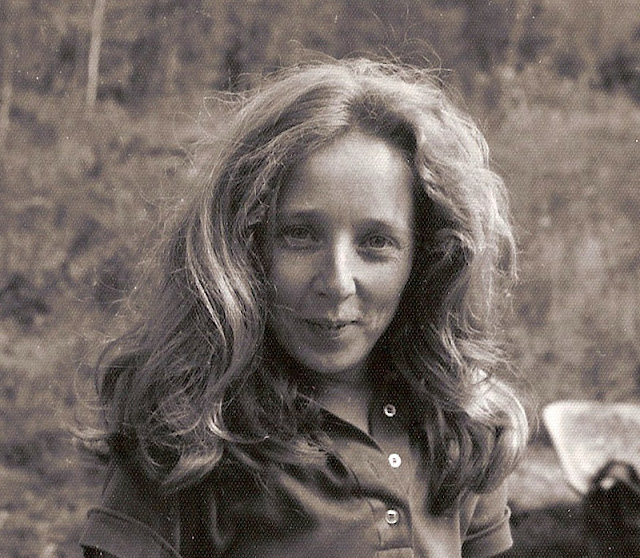 But Advent is upon us, it’s nearly Margaret Eve, and I’m excited. Mark your calendars: International Day Of Margaret is Tuesday, December 13th. The carols have begun. Rrraawwwk The Herald Angels Sing. Little Drummer Boyshorts. The Christmas Thong. Panty Claus Is Coming To Town. Ding Dong Merrily On Thigh. Lo, How The Rosy Bloomers. O Holey Night. It’s time to upend those drawers, cast out the old, and tug up the new! Let’s hoist a pair of skivvies To Margaret! To Margaret, and the dawn of a fresh and stretchy new year!

If the new stuff doesn’t work out, Boxer Day is right around the corner.