Marge and Studley In Da House!

Marge and Studley Windowson are back again and I am so relieved.

It was no sure thing my chickadees would be back in the nesting business. At least not in the box Dave set up for them outside my window. Last year and the year before they made a go of it but didn’t produce any working chickadees. And that’s a heap of trouble to go through for nothing.

Last year she had a good start on the nest inside the box and then disappeared when the wasps showed up. Without much hope of success, I took down the box and removed the wasp nest that was hanging down like a chandelier from the ceiling. It was off-putting to me, and I’m certain Marge felt the same way, although she and Studley are made of stouter stuff than I am. A wasp or two came by after I absconded with their sculpture and decided the neighborhood was a little too iffy for them, and they moved on. Amazingly, Marge came back to check on things, found the chandelier gone, and resumed work on the nest. But some time before the eggs hatched, they abandoned it. I don’t know why.

And yes, it is truly Marge and Studley. I will hereby admit I called them Marge and Studley for years without being utterly certain it was the same pair. Chickadees don’t veer off the template much. You see one chickadee, you can kind of write the book on all the others. But last year Studley showed up with a bum foot. It was pink and swollen, and over the course of a couple months it looked like pieces of it fell off. The only thing I can think of is he narrowly escaped a cat. And I think I know which cat.

This year his foot is nice and gray like it’s supposed to be, but the toes aren’t the right length and two of them are missing claws. When he lands on the nest box hole with his right foot, his left foot sort of slides down the side, for a lack of grabbiness. But he perches just fine, and that’s mostly what he’s doing now. He’s keeping watch on a stubby branch while Marge works on putting the mattress together. And he’s taking it seriously. His head turns every which direction and when he spots an intruder he gives it what-for. Mostly he scolds, but if there’s a smaller bird, he’ll chase it off. That means the Lesser Goldfinches are on the run for sure, and so are the bushtits. The bushtits don’t really act scared, to be honest. He might aim at one and dislodge it and then they all fly off in a bunch, but they’re all “Oh, are we going this way now? Fun! Whee whee whee!” Still, it has to puff out Studley a bit to rout fifteen birds at once.

Scrub jays, whole other thing. If you could scare off a scrub jay by going dee dee dee at it, there’d be a lot of terrorized jays around here, but you can’t. I don’t frankly know what would scare a scrub jay. I used to like them before one made off with my nuthatch baby on its maiden flight, and now I’m a little peeved. I thought I’d help out Studley when a jay landed outside the window and I opened up the window and went all boogah boogah on its ass, and all it did was size up my eyeballs for spearing.

I worry about Marge and Studley though. I’m going to help out as much as I can this year. I’m going to buy some mealworms, which I’ve never done, and I’m going to put them on my windowsill for them. I’ll try to rig up a parasol because the cascara tree has lost most of its leaves and I don’t want the eggs to cook. I’m going to be very stern with the scrub jays. I’m going to aim a fire hose at the neighbor’s cat at every opportunity. The neighbor said that was okay with her, not that I asked first. Sadly, it’s considered a social blunder to fire-hose your neighbor. 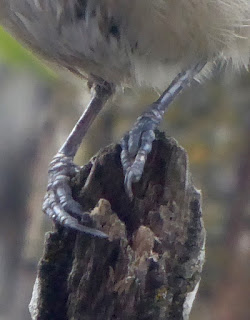 Studley and Marge and the rest of us, we’re all in the same boat. I despair of living with a ringside seat to the next great extinction event. I despair for the beautiful babies my friends and family are still cooking up, and I know they’re due for troubles our ancestors could never have foreseen. I can scream and shout and fight with people on the internet and write post cards to my congressmen and most of the time–maybe all of the time–it’s not much better than standing on my branch and going dee dee dee. But if Studley is still willing to fight the good fight with his bum foot, I can do it too.