A Matter Of Some Gravity 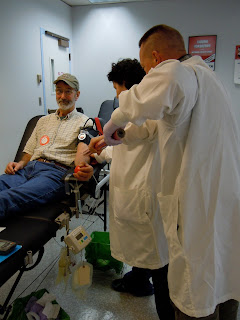 I’ve been giving A+ blood for forty years since. You get used to the routine, although it does change. The questionnaire got a lot longer in the eighties. 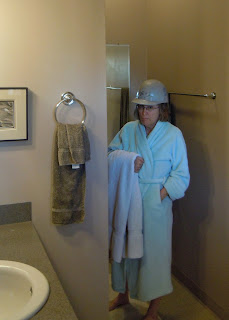 The donation itself is not noteworthy. It’s never given me a spot of trouble. I’m packed off to the cookie room with a set of instructions that has not varied in forty years. “Drink plenty of fluids. Do not take your bandage off or shower for three hours. Moderate exercise only, and no heavy lifting for 24 hours.” I’d leave the donation center, peel off my bandage, bicycle home, lift my bike up the stairs, and hit the shower before popping the first of a series of beers, which, if you press them about it, are not the fluids they had in mind. Since nothing untoward has ever happened to me, I haven’t changed my protocol.

What they should have said is: “Drink plenty of non-alcoholic fluids and don’t take a hot shower because even though everything will be just fine for the first forty years, there’s no telling what will happen after that.” That would have been more accurate. Last week Dave and I came back from our standard blood donation. A purveyor of particularly fine brew near the Red Cross sells cheap pints on Tuesdays, and we always schedule for Tuesdays so we can get an immediate fluid replacement pint. Then we walked home and Dave made dinner. I might have had a nice Muscat to go with. Then I went to take a shower. We’re five hours into this thing by now, and everything was going well until I decided to hot up the water, and I remember having the thought that I should turn the water off because something was wrong, and the next thing I knew I was staring up at the glass shower doors from a crumpled position at the bottom and swimming in place trying to get myself upright. I stumbled to the towel and things were still wrong and I thought I should probably go to bed before I fell over again, which would have been a good idea, but instead I found myself on my hands and knees next to the bed, and I finally climbed in. While there I tried to review ordinary items of information to see if they were still there, and some of them weren’t. It wasn’t until morning that I recognized that the hands-and-knees part had apparently been preceded by a second crash, as evidenced by the noggin-sized hole in the wall and a pretty good headache. 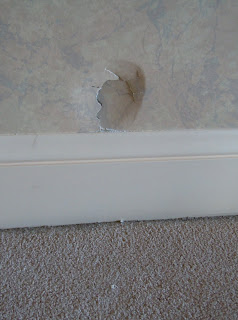 I don’t think I’m going to give blood anymore. It’s either that or quit drinking, so it’s that. I realize this is a little selfish of me, so I’ll just say that I’m still on the blood marrow donation program, in case anyone needs any. Act now, because according to the Red Cross my stuff is going to go bad in another two years.