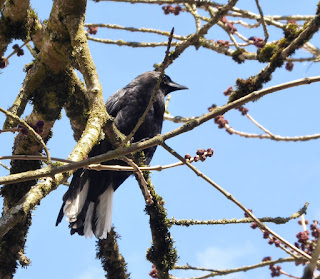 It’s spring, and two crows were wheeling in the sky in a sort of ballet. “That looks like courtship,” I said, and Anna burst out laughing.

“Only you would name a crow Corn Chip.”

Now it’s just a matter of figuring out which one Corn Chip is. And that’s the problem. Dave is in about the tenth year of a project trying to entice a crow to be his personal little buddy. It’s sad, really. Crows make friends with people all the time. Some little girl is famous for  her personal crow that brings her some new bauble nearly every day. She has a whole collection. Dave doesn’t even have a bird poop collection. That’s how far away the crows stay from him.

He walks out every day and lines up peanuts on the wall for them. We’ve all heard the stories about how smart they are and how they can tell people apart and know who’s good and who’s bad. Our crows observe him from the top of a 200-foot Douglas fir and wait until he’s all the way back inside to get their nuts off. The wall. They know perfectly well it’s Dave providing the goods but they won’t give him the satisfaction of a how-do-you-do. And yet, bless his danged hopeful bones, he persists. 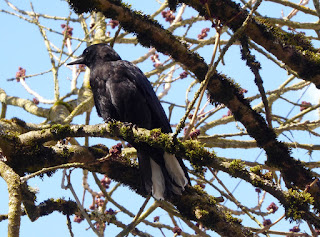 This spring things are looking up a little. After so many years he’s finally gotten a few crows to hang around while he flings his nuts. Naturally, we figure it’s the same crew coming around all the time. We have the idea that crows have favorite trees and even though they go downtown for the night they come right back to the same spots. But since the crows we think of as “ours” all look exactly the hell alike and have exactly the same behavior, we can’t actually name any. “That one there: the crow that ignores you, Dave,” I say, but that describes ten thousand local birds.

But we do know one distinctive crow. We have to walk about three miles to find it but it’s reliable. Half of its tail feathers are white. It is one fine and fancy crow. I always took it as further proof crows hang out in the same places all the time. This particular crow has been there for years. “Unless it’s a completely different half-white-tailed crow in the same tree every time,” Dave says, because he believes he has not yet driven me sufficiently crazy.

Crows can live a long time. One lived as long as thirty years in the wild. They sawed open his legs and counted the rings. That might have been what did him in.

Supposedly the lack of pigmentation is common among urban crows, but I’ve only seen it twice. The other one had some white wing feathers. We had a kid in our grade school that had one white eyebrow and a white patch in the back of his head. It freaked me out at the time. I thought maybe it was early onset elderliness and worried it might be catching.

The condition is called leucism, because that sounds more scientific than Crow Tail Exuberation. So we should probably call this crow Lucy, but until one of our yard crows gets rid of the attitude and sweetens up, we’re going to call it Corn Chip.