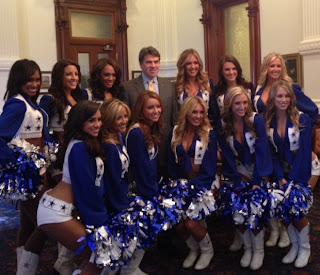 “It’s a good June, and the holidays are coming early this year!” [actual quote]


The mood was festive indeed, as Governor Perry signed the Merry Christmas bill while surrounded by an oddly arousing combination of Santa Clauses and cheerleaders. No longer would the good citizens of Texas be sent to the slammer for wishing each other a merry Christmas.

“The birds are wingy, and our pants are high. Let’s do some legislatin’!”

The Speaker was ebullient. “Hear, hear! Let’s bang the seldom gavel and bloom the agenda train! What is our agenda, anyway, this fine good June?”

“Three things–water, some kind of uterus thingy, and–I can’t remember the other one. Oh. If I could make a motion, before we wrap up this legislative and moral victory: I would like to propose an amendment to this bill. We’re not done here. We need to protect all our free good speech, including ‘Jiminy Christmas,’ ‘Lawsa Mercy,’ and ‘Jesus H. Christ on a stick,’ as in ‘Jesus H. Christ on a stick, it’s hot,’ or “Jiminy Christmas, it’s thirsty down here.’ As long as I’m governor, the good citizens of Texas will be free to express themselves as biblically as they want.”

The gavel is banged twice to indicate optimism. “Old business?” the Speaker said, stopping just short of the third bang, when a hand went up.

“The Speaker recognizes the godless liberal from Austin.”

“What did I just say? Ma’am. Please. We heard your prayer the other day, about the freedom to not have religion, if we wanted. Hey Henry,” the Speaker called out to his aide, “how we doing with the counter-prayer?”

“The counter-prayer was deployed within minutes, sir, with a couple for backup–we’re still ahead. Also we’ve got John 4:14 running in a loop on the scroll bar below the evening news for further protection.”

Rep. Howard shook her head. “It has always been legal to say ‘Merry Christmas,'” she said.

“And now it is even legaler.”

“So I was just wondering what the governor meant by ‘the holidays are coming early this year.’ I am aware that bird migration has been disrupted and their breeding season is in danger of not synching properly with their food sources, which are blooming early due to climate change. Does this have something to do with that? Because…”

“The fair representative from Austin will be excused for her antique language. We don’t have climate change. We straightened that out last session. What you might be referring to is the Fairweather Enhanced Opportunity Paradigm. Aw, don’t be such a grumpytits! Change is good for business. Which brings us to our first item: water. We’re just about out. And you know what that means. Opportunity! Where there is scarcity there is wealth. And water is the new oil.”

“We haven’t had any measurable rainfall for three years, Governor, and the aquifers have been drawn

down to unsustainable levels. We can’t keep it up.”

“I’d like to assure Rep. Grumpytits that she is not now, nor will she ever be, personally aware of what I can and can’t keep up. Ain’t that right?” The governor shot a wink at the cheerleader contingent. “Let the record show Rep. Howard is going on about sustainability again. Good news, people! We have someone here who has offered to bottle us up some fine good Texas Aitch-Two-Oh.”

“Let the record show that Representative Grumpytits has made our point! Where else can we get that kind of bang for our buck? I’d like to introduce y’all to Mr. Slixter, CEO of the fine good corporation Mother Nature’s Woo Woo Dew, over there between Dixie June and the nice Hispanic Santa Claus–raise your hand, there, Mr. Slixter–to whom we’ve just signed over our water rights in a closed session last night. Sorry you couldn’t make it, Representative.”

“You’re welcome for that. And welcome to Texas,” the governor grinned, pumping the hand of Mr. Slixter. He grinned back.

“Christmas sure came early this year.”