Middle C Is The Key 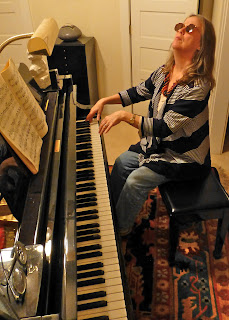 At the Van Cliburn competition, a blind pianist brought down the house. Nobuyuki Tsujii played Chopin and Liszt without flaw. The Liszt gave him more degree-of-difficulty points and he totally stuck the landing. Liszt is a nineteenth-century Hungarian composer renowned for jamming in more notes in his pieces than anybody really needs. Fully eighty percent of them are extraneous. He was a rock star and loved to write things no one else could play. I don’t like much of his stuff, but it sure is notey.

So Mr. Tsujii earned his applause, based on notes banged out per second. Someone helped him off the bench and steered him to the wings, where a breathless woman was waiting to interview him for a documentary.  “How do you play all those notes?” she gushed. Well, like everyone else in the competition, he probably practiced for ten hours a day for a decade. He shrugged politely.

“I mean, because you’re blind and all. What do you do? Can you sense the center of the piano by where the pedals are?”

Well, she’s got him there. She nailed the secret, and now that she’s blabbed about the pedal trick, probably just anyone can play the piano. People had a terrible time before pedals were invented. Early harpsichord players were frequently embarrassed in concert when they misjudged the center of the keyboard and played the whole program one or two notes south. They could tell right away that they had missed, but were helpless to correct it without the pedal.

Many of them developed coping methods by measuring the keyboard with outstretched arms and centering themselves accordingly. But if one arm was shorter than the other, which was a problem with your frequent masturbators, they were left in the lurch again. Many had to simply trust that the bench had been properly centered and then they could feel the correct position by the butt-cheek depression, which is why people prefer using their own benches. But any stage-hand with a prankster’s disposition could throw everything off.

Our interviewer was astounded by the ability of a blind man to play the piano. In reality he is only slightly more inconvenienced than anyone else who reads music. Your average chamber musician flies through difficult pieces without once consulting the keyboard, because she is looking at the sheet music. She is able to judge the distances between the keys using the same method that makes it possible for people to pick their noses without poking their eyes out: muscle memory. Similarly, with a little practice, even our interviewer could probably learn to find her butt with both hands on the first try. 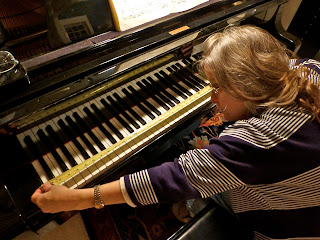 But that is not the only tool in the piano-player’s shed, because he also has The Bumps. With the bumps, even without a method for finding the center of the piano, a player can feel his way across the keyboard. The raised, narrow black keys could have been designed to be the same size as the white keys and all lined up square, but that would have made the keyboard the length of a station-wagon and playing Liszt a more aerobic experience than it already is. So they squoze the keys together and made the bumps. Initially the regular notes were black and the bumps were white, but they changed that over when pianos replaced harpsichords. There was quite a transition period when sighted players were confronted with the exact opposite color keys–a period known as the heyday of blind musicians everywhere, who were at a distinct advantage because they had been using the bumps as Braille all along.

Our Van Cliburn competitor was enough baffled by his interviewer’s grasp of the making of music that he replied with diffidence. He was probably worried she was going to ask him how he was able to hit the toilet. But whereas he might have been inconvenienced by his blindness in learning music, it might not have been as much as one would think. The interviewer drew her own conclusions. “It’s just a gift from God, that’s what it is,” she swooned. Well okay then. He still had to open the gift and take out the tissue paper and get the instruction manual and devote a number of years to getting it to work properly.

Or maybe it’s just that the people who only know “Chopsticks” got the heavenly lump of coal.