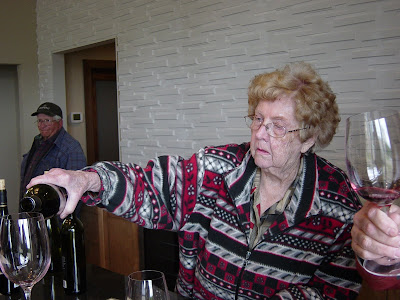 A wine-tasting tour, the way we do it, is sort of like a mastodon hunt. If you really want to be successful, you enlist the whole village. There were ten of us who headed out recently to take down the mighty Yakima Valley Zinfandel, and we were so successful we may never walk right again.

This was a three-day foray, so it was important to select a group carefully according to a strict set of compatibility criteria. Not really. You just have to score high on the giggle index. Our group included two engineers and a lawyer, so we were unlikely to encounter any circumstance which we could not make more complicated.

Our home base was the Sunnyside Inn B&B, which might suit you if you like enormous rooms with jet tubs you can do laps in, beds so wide you could mislay your partner, as it were, and home cooking and tender care that cause you to reassess your own mother.

Sunnyside itself is the Home of Hacked-Off Trees. Most yards have them. They let their trees get only so high and then they whack them into knobs. Maybe someone originally got the idea from the heavily pruned orchards in the area, and then other people thought it must be the thing to do, too, even though it was unattractive, and before you knew it a style was born. This also explains mullets.

First-day fresh, we had the Snoqualmie Winery surrounded by ten a.m. and bagged a whole herd of Sangiovese. From there we stalked the Syrahs at Desert Wind and picked off some stragglers. “Swirl, swirl!” the pourer commanded as I began to decant a merlot into my face. Apparently you’re supposed to sneak up on these puppies. By the middle of the afternoon, I was swirling pretty good.

My favorite wines are the first fourteen or fifteen of the day. After that, they tend to get a little sleepy. We were looking forward to the preserve at Chandler Reach, a particularly lovely setting overlooking the Rattlesnake Ridge and valley, but it was closed. A pair of irascible dogs was on patrol. They may have been Terroirists. Tired from the hunt, we whined and scuffed our feet out front until the proprietor, Len Parris, came out to investigate. After a bit of conversation, it was determined that we still had money and he still had wine, so he opened the joint up and let us have at it. It was a good haul. Mr. Parris pointed to the circling squadrons of sandhill cranes riding the thermals overhead as evidence of a warmer microclimate conducive to his wine grapes. He did have a fine product. Could have been the crane poop, though.

By the last day our party was best described as amusing, but lacking structure. The sun came out and the breeze picked up and the scent of spring was suddenly everywhere. We were breathing deep in appreciation, even after discovering that we were directly downwind of the urinal cakes in the port-o-potties at Two Mountains vineyard (fruit-forward, notes of cherry and raspberry). We strapped the mighty Zin to the hood of the pickup and headed south again.

Home, we hauled in case after case of wine and stacked them high on the floor. That’s when it hit us: we’re beer drinkers. We won’t go through that much wine in two years. Somewhere around 12,000 years ago, someone stood observing a mastodon carcass crammed into her cave from basalt to bats, and felt the same way.